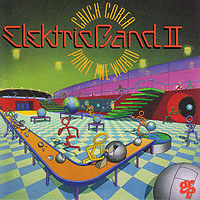 Honestly I expected something more like paint by numbers, since the Akoustic/Elektric albums I own (none with Eric Marienthal) never lit a fire under me. Paint The World initially met my expectations, exorcising the last traces of staid acoustic jazz on the opening two cuts. From that point on, however, it burns; maybe they should have called this the Chick Corea Nuklear Fusion Band. Before I put too much confidence in Paint’s corner, it appears that Beneath The Mask, Inside Out and Eye of the Beholder contain much of the same magic. That’s a discussion for another day; right now I’ll tell you that “Tone Poem,” “CTA” and the combination of “Silhouette/Space” is enough to vaunt this disc past of most of Chick’s ‘80s releases. I was sold on this painting after that, from the way that Corea’s keys glide confidently at the front to the solid foundation that grows from the crisply self-contained rhythms of Jimmy Earl and Gary Novak. The new element to my ears is the addition of saxophonist Marienthal and guitarist Mike Miller; it immediately places the Elektric Band in the rich field of fusion (you’ll be reminded of Weather Report more than once). As is usually the case, Corea embraces different styles with his unit, some of it very edgy (“Ished”), some of it languid (“Reprise”), tossing in passages of elegant cocktail jazz (“Ritual”) and weaving wonderful guitar passages into the result. The real treat for longtime fans may be “Spanish Sketch,” where Corea takes an earlier theme (sorry I forget from where) and re-casts it in monumental bronze. Needless to say, I’m not buying any more latter-day Corea albums until I finish off the five-piece works: Light Years, Eye of the Beholder et al. As a three- and four-piece they could generate some heat, but it’s as a five-piece that they really catch fire.

All songs composed by Chick Corea unless noted.
*The bass line for “Space” is an adaptation of the bass part from the track “Soro (Afriki)” on Salif Keita’s album entitled Soro.