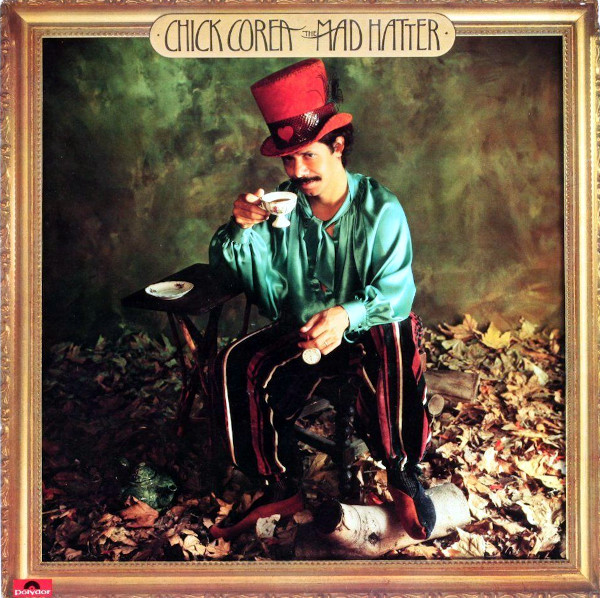 A concept album, sort of, that finds Corea and a familiar cast of players in an imaginative mood.

Kronomyth 21.0: What is the use of a book without pictures or conversation?

I’m a sucker for program music, even when the pretense to a program is pretty flimsy, as it is here. Without the concept of Alice In Wonderland to tie things together, The Mad Hatter would simply be another of Corea’s eclectic jazz samplers from the late Seventies. But by giving the pieces themes (e.g., “Tweedle Dum mournfully recalls the beauty of his distant past”), Corea affords us a wider window into the music than might otherwise exist.

Having gazed at these songs intently on a half dozen occasions, I’d proclaim The Mad Hatter one of my favorite Corea albums from this (or any) period. The music ranges from moogy mind candy (“The Woods”) to classical jazz hybrids (“Tweedle Dee”) to Latin-inflected jazz (“Dear Alice”) to a blowin’ quartet of the straight stuff (“Humpty Dumpty”). The same fare you’d find in mixed amounts on a lot of Corea albums, but The Mad Hatter stands taller than a Secret Agent or Tap Step. In fact, next to My Spanish Heart, this is the ‘70s Corea album closest to mine (not including RTF).

The reason is the quality of the material; Corea has mined these forms many times, but rarely have they sounded so good. Gayle Moran’s voice (which I usually have to brace myself for) works very well in this setting, whether propped up against the strings at an angle on “The Trial” or soaring in and out of “Dear Alice” as if she’s always been there. Even Chick sounds more inspired than usual, building a palpable setting for “The Woods,” blending his piano perfectly into the potentially daunting number of players assembled for some of these pieces.

From the rest of the cast, the rhythm section of Steve Gadd and Eddie Gomez is superb, and Joe Farrell is always a pleasure to hear. Herbie Hancock also appears on Fender Rhodes for the closing “Mad Hatter Rhapsody,” but to my ears it just sounds like so much noodling at first, improving only when the distortion is turned down. In the end, the story of The Mad Hatter really isn’t important; think of it as a nice package that makes you want to find out what’s inside. If you enjoyed the confections contained in My Spanish Heart, The Mad Hatter holds more of the same.

All selections composed and arranged by Chick Corea unless noted.