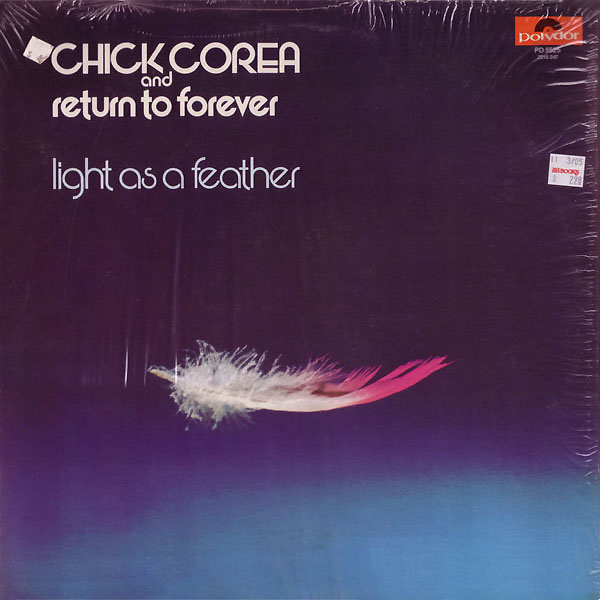 Airto, Flora and the first lineup of Forever deliver a dreamy fusion album for sambanambulists.

There is, first of all, some heavy Rhodes work ahead of you, all of it under the bright heat of The Sun tarot, where wah-wah petals bloom and breathe, and exotic flora draws the fluted bill of hornbirds (farrell prized for their feathers), darting between tiny flecks of buzz and trill in the moving Air to which the thick kerplunk of bubblebees in silky grottoes do attend, a rich stew of ebullient bass.

This sambient air buoys the second ride of the Phoenix, which has caught many a critic’s accolades in its currents. With Corea as its marvelous captain, RTF dances in the dappled sunlight of this new world, as animated exotica moves in dreamy sambanambulance and tiny eruptions of hardened jazz rumble harmlessly through the forest. 500 miles high, the Phoenix soars, light as a feather. It reappears as a dream-image in a child’s mind, carrying only the persistent tick-tock of a clock from the workaday world. It winds through the lively streets of Spain as a spirit, beckoned by the bacchanal of the living.

There are the light and lithe rhythms of Airto Moreira, the airy vocals of Flora Purim, the refreshing flute and heated hornwork of Joe Farrell, and the Phoenix would soon find itself light these few original feathers. Then there is the stunning complexity of structure evident in Stanley Clarke’s electric, acoustic and bowed basswork and, greater than all that, the colossal Rhodes of Chick Corea. The captain plays the Rhodes like a lead guitar sometimes, hammering out notes in quick staccato stabs or bending the notes with his wah-wah pedal. Rarely has the instrument sounded so free and expressive, so timeless and beautiful.

Light As A Feather is a different animal than the ferocious beast that RTF would later become. Here it’s all sunlight, warmth, bathed in beauty, using its superlative playing as a buttress to support an airier, lighter creation that fuses samba and electric jazz into something exciting and adventurous.