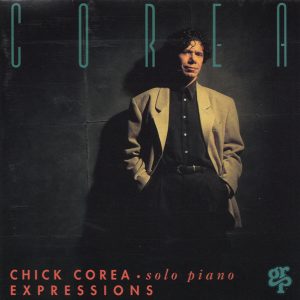 Kronomyth 53.0: A GRAND TIME ALONE. This is Chick Corea alone at the grand piano, chewing up such classics as “Someone To Watch Over Me,” “Stella By Starlight,” “Lush Life” and “Smile,” and spitting them back in his own notey and Latin-accented idiom. For Chick’s fans, Expressions is tantamount to Bryan Ferry’s tin pan alley albums: revisionist and reverent and idiosyncratic at once. After fifty-plus albums, most of them in a group setting, it’s hard to get jazzed about Chick Corea playing oldies on a piano. Some of the songs sparkle, others are spikey and hard to swallow (e.g., “Monk’s Mood”), many of them could have been extemporized from sheet music for all I know. Artists usually make albums like this when they’re put out to pasture and left to ruminate on their place in music’s history. Dedicated to Art Tatum, Expressions may well make the case for Corea as a successful student of Art who added his own percussive sensibilities and dramatic/romantic flourishes to the music. Honestly, I hardly listen to a lot of Art Tatum, so I couldn’t say for myself where the two styles intersect. I do listen to a lot of Chick Corea, and Expressions is a departure from his usual fusion of Latin, jazz and rock. This is the sophisticated album of bop meets black tie that so many jazz artists seem to make eventually. Of course, you could go to the original source (Thelonious Monk, Bud Powell, Bill Evans) if you were really in the mood for piano jazz. For me, Corea will always be an electric player who grew a little long in the ivory tooth when behind the acoustic piano. That said, Corea’s fans will no doubt find it interesting to hear their idol tackle the classics, including his own “Armando’s Rhumba.” Okay, so chances are you already own three or four versions of “Armando’s Rhumba” already.