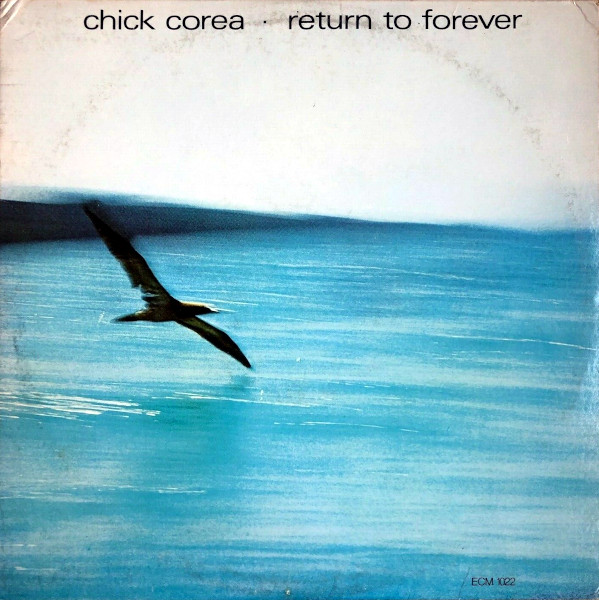 Technically the first RTF album, a fusion of Latin and jazz with plenty of melody and some guy named Stan.

Kronomyth 9.0: A return to melody.

The free jazz experience of Circle had been a liberating one for Chick Corea. When he returned to a structured format, it was with a greater sense of freedom and self. His first group project, Return To Forever, featured husband-and-wife team Flora Purim and Airto Moreira, old friend Joe Farrell and new bass wunderkind Stan Clarke exploring Latin-based melodies in a dreamlike setting. (All ECM recordings sound like dreams to me; it seems to be their thing, which probably results from Manfred Eicher’s deep appreciation for space and silence.)

Initially released only in Europe and Asia, the first Return To Forever record marks an exciting, new chapter in the music of Chick Corea. The opening title track begins with Corea’s petal-soft electric piano notes, then quickly builds into a waking dream of voice, flute, drums and bass. In one sense, Corea had taken the meditative music of John Coltrane and replaced the horns with the human voice and flute, although the music also has a deeply human element where Coltrane was more spiritual. The Coltrane comparison is even more apparent on “Crystal Silence,” a duet between Corea and Farrell (on flute) with atmospheric percussion added. The first side closes with the lyrical and lovely “What Games Shall We Play Today,” a showcase for Flora Purim’s beautiful voice with a positive message and positively charming melody.

The second side of music, “Sometime Ago—La Fiesta,” slowly builds into one of Chick’s grand Spanish statements. Clarke is amazing on this track, splitting time between acoustic bass, bowed bass and electric bass and impressing at every turn. For those who question whether RTF belongs in the prog camp, the opening of “Sometime Ago” is a ringer for the orchestral side of King Crimson. Although it’s a different record than the later RTF recordings—a warmer Latin relation, if you will—Return To Forever is an inspired introduction to the Fender Rhodes fusion phase of Chick Corea’s career. The songs are some of his best and, though Corea chose to take the band in a different direction with the electric guitar, this record is in every way a hero’s return from the fringes, albeit one that was smuggled in as an import initially.

All music composed by Chick Corea. Lyrics by Neville Potter.