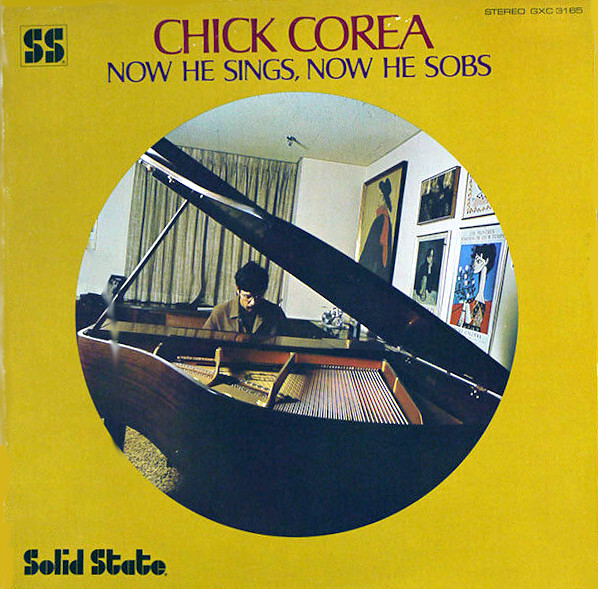 A nice balance of heart and brain, featuring an acoustic trio with Roy Haynes and Miroslav Vitous.

I tend to divide Chick Corea’s music into one of three categories: early fusion, early trio music and everything else. Now He Sings. Now He Sobs is the first of the early trio albums, featuring Roy Haynes on drums and Miroslav Vitous on acoustic bass. It’s here that listeners are introduced to the real Chick Corea: the complex writing, the prolix playing, the Latin themes. The opening “Steps – What Was” starts out as intellectual stuff but, midway through, shifts into one of those sublime, timeless Latin melodies that will be instantly recognizable to fans. This and “Now He Sings – Now He Sobs” could be considered the first classic Corea compositions for their blending of melody and complexity. The remaining pieces are notey, daunting, occasionally breathtaking but more often exhausting. Haynes and Vitous adopt unconventional stances throughout the record: Haynes with his rattling rim playing, Vitous with his sticky fingerstyle.

What I enjoy about the early trio albums is their general fearlessness and transparency. The listener has the sense that they’re looking over Chick Corea’s shoulder, synchronized with him in the act of creation as new possibilities in the music are revealed, explored, abandoned, revisited. As exciting as that is, there are quite a few passages where it feels like Corea, Haynes and Vitous are off doing their own thing; maybe that’s just an aspect of their artistry that I don’t fully appreciate. Also, while I’m being honest, I’ve always found Miroslav Vitous to be an acquired taste, which I’m still in the process of acquiring. So, in summary, Now He Sings is half an album of classic Corea trio music and half an album of exploratory jazz punctuated by a wonderful question mark (“The Law of Falling And Catching Up”) at the end. In the 1980s, Blue Note repackaged this with the remaining tracks from the original sessions, many of which had turned up on earlier compilations such as Inner Space and Circling In.

All compositions written by Chick Corea unless noted.