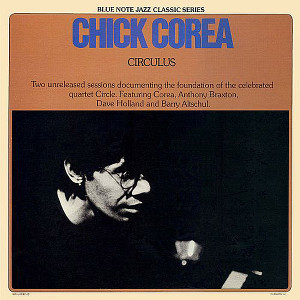 A double-elpee collection of Circle sessions from 1970 that reveal how underrated this experimental outfit really was.

Circle is fast becoming my benchmark for free jazz. This double-elpee compilation fills in more of the history around their brief but remarkably fruitful association. The first track, recorded several months earlier than the remaining pieces, features just the trio of Corea, Altschul and Holland. Where their earlier trio work was noisy and confrontational, “Drone” is soothing and natural, like a landscape painting of sound. I keep coming back to kinetic theory when trying to describe the two: A.R.C. and its ilk were superheated molecules that didn’t impact one another except on impact, but with Circle the molecules are in sympathy. There’s also a curious spirit at work in Circle, almost a sense of innocence as the musicians seek to discover new sounds together. On a piece like “Quartet No. 2,” for example what strikes me isn’t the quality of playing—it’s the quality of listening that impresses. The quartet is keenly tuned in to what the other person is playing, and what ensues is not merely a conversation but a kind of free jazz support group where the members goad each other on to cathartic discovery. That sense of discovery starts with their own instruments: Corea hammers, plucks and punches his piano to get new sounds out of it, Braxton’s breathing goes from lungfulls of fury to a death rattle, Holland moves effortlessly between bass, bow and guitar, and everyone gets into the percussion game. (If you really want to hear the band head into the wild, check out the Cartesian catharsis that closes “Quartet No. 2” and stick around for the brilliant experimentation of “Quartet No. 3.”) The songs of Circle are miniature musical adventures ripe for rediscovery. You’ll need a needle for this one for now, but maybe some enterprising label will reissue Circulus on compact disc some day.