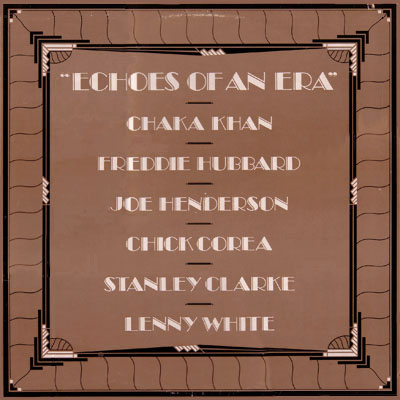 I like RTF, so I picked up Echoes of An Era and Griffith Park Collection when they came out. Both bored the pants off me, and I ended up giving Griffith Park away. Loads of talent on these recordings (Freddie Hubbard and Joe Henderson on horns) but not a whole lot to say. Echoes took a gamble by letting Chaka Khan chew up eight classics. Her voice is the neodymium magnet in the room: you’re either attracted to it or freaked out that it’s in there. Personally, I’m pretty freaked out by her voice most of the time. I can listen to her without wincing, but to say that the horn solos of Henderson and Hubbard bring me relief is an understatement. Since I can only listen to people talk about jazz for about fifteen minutes before I want to tweak their little red tomahto nose, maybe I’m not the best judge of Echoes. You really need to buy into the idea that jazz is this evolving dialogue between the past and the future or something. You need to buy into the idea that Chaka Khan’s vocal interpretations make you hear classic music in a new way, and not in the way that The Chipmunks made you hear it. Whether you want to pay fifteen bucks to buy all that, that’s your decision. If you’re intrigued by jazz titans from the ‘70s playing old school jazz, I’d point you toward Herbie Hancock’s VSOP engagements instead (Freddie Hubbard was involved in both projects).