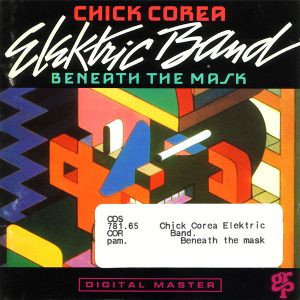 Kronoymyth 50.0: CRITICAL MASK. The census in prog circles suggests the Elektric Band was winding down, though smooth fusion fans seem to get a charge out of this final disc from the original Elektric company. Spineless, shaven weasel that I am, I side somewhere in the middle, feigning toward the former’s phobia on the smoother cuts (“A Wave Goodbye” and “Free Step” are tasty but hardly chewy), leaning toward the latter’s enchantment with the impressive “Charged Particles” and “99 Flavors.” With John Patitucci and Dave Weckl cowriting most of the material, there’s no central theme at work on Beneath The Mask. The songs are short, lively, mostly smooth fusion numbers featuring lots of soprano sax and guitar solos. The core trio of Corea, Weckl and Patitucci are mostly in the background (Patitucci does get a cameo on “Jammin E. Cricket”) while Marienthal and Gambale are given the limelight. And so, under the sign of the staid emperor sit Chick and his chicklets, issuing smooth uniform slices of upbeat saxotarotimo songs and waiting for a strong third wind to guide them. Weckl and Patitucci sailed for new ports after this disc, making it something of a death mask (they looked so Alive not long ago), while Gambale and Marienthal stayed on board for the Emperor Elektrobath II. In my opinion, the next chapter (Paint The World) is far more interesting, so I have no trouble turning the page on Mask and moving on. Plus those RTF albums were made in the sweetly smoky analog air of the Seventies and not the airer-free digital clean rooms of the Nineties, with their soundbanks and triggers. If you enjoy the GRP smooth fusion sound, and a lot of people do (fusses all of them), Mask is a blast. If, however, the mere suggestion that a comparison could be made between Frank Gambale and Al DiMeola elicits a snortle (a mixture of snort and chortle), then this album might be beneath you after all.