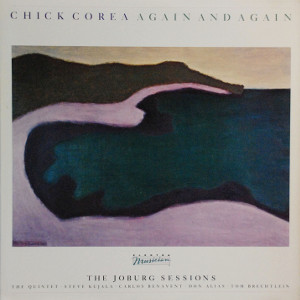 Kronomyth 37.0: SWIRLED TOUR. This is a studio recording of material that Chick and his current five-piece band were playing on tour, some of it written as far back as 1979 but captured here for the first time. Recorded in a single day in South Africa (thus the parenthetical addendum), Again And Again is split down the middle between warm Latin jazz (side one) and noisier, funkier fare (side two). Steve Kujala also splits his time between the flute and the sax, and something about the flute makes the first side quieter, particularly in the rhythms from Tom Brechtlein, Don Alias and Carlos Benavent. This has historically never been a favorite album of mine, but it seems I’ve softened with age and thoroughly enjoyed both halves this time. The first side is a good example of Corea the composer, particularly the opening “Quintet #3,” a piece that had originally been scored for a trio (according to the liner notes). It’s one of those warm musical vistas bustling with good ideas and well synchronized movements. The two tracks that follow are also enjoyable and representative of this “quiet period” in Corea’s work before the bombast of the Elektric/Akoustic Band. On side two, “Diddle Diddle” has always caught my ear for its Lounge Lizards edginess (once a punk, always a punk), though the chemistry between Corea and Kujala (here on soprano sax) is surprisingly poor. Again And Again isn’t a fusion concept album and it doesn’t quite fit into Corea’s early 80s classical phase. It’s two sides of a multi-faceted artist captured at a moment in time with one of his less ostentatious outfits, a pair of pleasant excursions to interesting places.

All compositions written by Chick Corea.