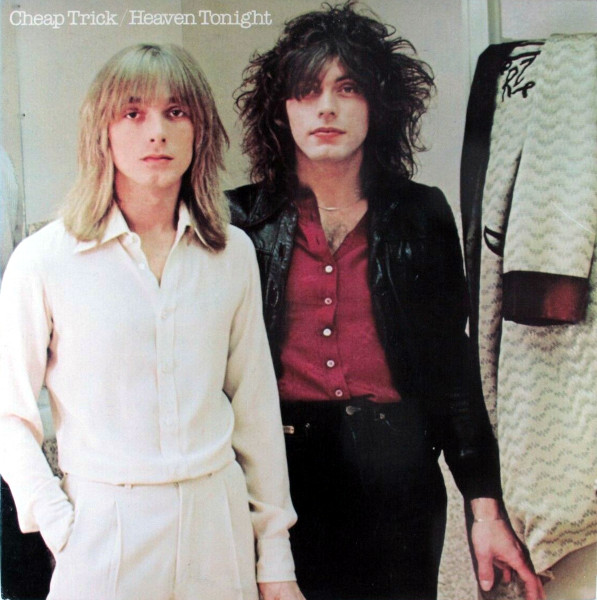 Another slice of technicolor heaven that puts the “pow” in power pop.

Kronomyth 3.0: Surrender, but don’t give your soul away.

The three albums produced by Tom Werman are the three best albums Cheap Trick ever made. The one in the middle, Heaven Tonight, even had a hit single and nearly cracked the Top 40. Things were looking up for the rising sons of the power pop scene, although it would take a live album from Japan to show us what had been blooming right under our noses.

When The Beatles burst onto the international music scene in the mid 1960s, they started something they couldn’t finish. It wasn’t called “power pop” back then, but “I Want to Hold Your Hand” and “I Saw Her Standing There” were ridiculously catchy rock & roll songs that activated all your musical pleasure centers at once and sent you into a state of heightened ecstasy. Sadly, the Fab Four pulled the plug on the machine in 1970 and disassembled it. Electric Light Orchestra tried to rebuild the machine with classical parts a few years later, and Cheap Trick swapped out the strings for a bigger motor a few years after that. Both were a labor of love, not copycat replicas.

Now, I won’t tell you that “I Want to Hold Your Hand” and “I Want You to Want Me” are the same thing. The Beatles were the product of an innocent age, and while they seemed perfectly content holding hands, Rick Nielsen had more amorous designs for his other hand. That was clear on the first album, less so on the next two albums as Nielsen toned down the lascivious wordplay. In fact, on the opening Surrender, Cheap Trick is outpartied by their own parents. The pop-band posing was mostly a ruse, while the rock & roll credentials were real.

The rest of the record rolls even tighter than their last. On Top of the World, Auf Wiedersehen, Takin’ Me Back, On the Radio and How Are You form a veritable primer in how to record power pop. Werman may be flipping omelettes these days, but he was flipping brilliant at bottling Cheap Trick’s energy into a pop format. In between, you’ll encounter some ravers (Stiff Competition and a scorching version of The Move’s California Man) and right-brain rockers (High Roller, Heaven Tonight). Challenging the idea that the band’s ascension wasn’t calculated from the beginning of time, the record ends with a prescient “konnichiwa” to the band’s Japanese fanbase, the same audience that would be present for Cheap Trick’s coronation on At Budokan.

On another, more depressing note, I discovered during the research of this album that the sped-up gibberish that appears on “How Are You” is actually an excerpt of The Lord’s Prayer. But it’s only a joke, it’s appearance between the words “you lie” is purely coincidental and the album’s title is nothing but a red herring or a winded oyster. For the night is fine and what can we do but admire the view?