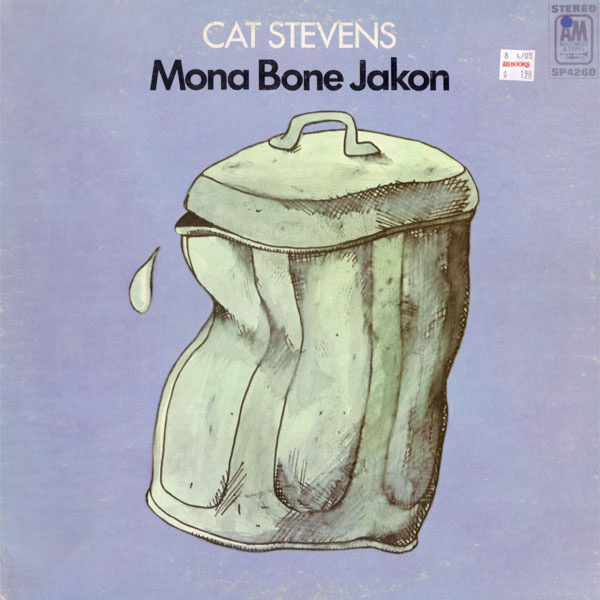 A slightly sweet biscuit before the proper serving of Tea and Teaser to follow.

Mona Bone Jakon is the genesis of Cat Stevens the folk/pop star: the warm baritone, stop-and-start rhythms, toy piano tinkling and playful spirit leaping. As such, it marks the beginning of Cat’s classic phase, a period that produced such hits as “Peace Train,” “Wild World” and you don’t really think I’m going to type all of them, do you? Yet, like so many early classic albums, it reveals an artist still in transition, one foot in a past that history would just as quickly forget. The opening “Lady D’Arbanville,” for example, is not a song that Cat Stevens will be remembered for at the end of days. It’s serious beyond its years, clearly the product of a clever mind but also the product of a lost age when free love and madrigals from the Middle Ages wafted in the conjoined air.

The future yet to come is heard on unfamiliar-to-many album cuts like “Trouble,” “I Wish, I Wish” and “I Think I See The Light.” You get an inkling of that on the second track, which see-saw shuffles like an old friend ambling towards you. So, in summing up Mona Bone Jakon, a very good half of it could be interwoven into the filler of his next two albums (e.g., “On The Road To Find Out”) without anyone being the wiser; the other half is an important young artist finding his voice. It’s precocious and immodest (the title track is written about his penis), but even this provides an historical context for the far superior serving of Tea to come. And a fair warning to prog fans: If you bought this to hear Peter Gabriel, you were flaut out robbed.

Speaking of robbed, if you’re feeling short-changed after such a short review, there’s a much, much, much longer and in-all-ways better review of this album here.

All songs written by Cat Stevens.