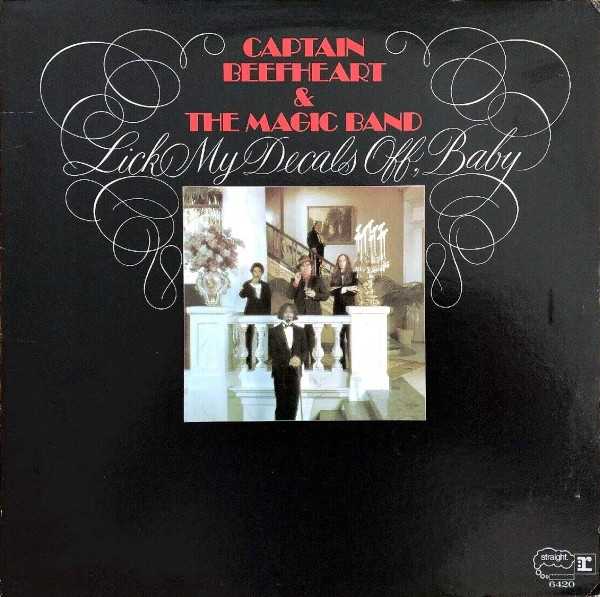 Beefheart flexes his magic muscle one last time for these bite-size replicas of Trout Mask Replica.

Trout Mask Replica was a revelation. Lick My Decals Off, Baby is a refinement, so much as this music could be called refined. (And maybe it’s very refined and we’re the uncouth.) The major changes are a slightly retooled Magic Band (the Mascara Snake and Antennae Jimmy Semens are out, Art Tripp is in) and the handing of arrangement duties to Zoot Horn Rollo. The result is a more musical album with a richer rhythm section that wears its inscrutable weirdness proudly.

Comparing this to his last album is a bit like picking a favorite child. One came before the other, but they’re both beloved. There is nothing on Decals as shocking as hearing “Frownland” or “Ella Guru” for the first time. And yet Beefheart’s fourth album is a less taxing effort for the listener than Trout Mask Replica. Maybe “refined” isn’t the right word, since this is more of a fine-tuning of Trout. Beefheart himself has expressed a preference for this album, and I might agree that Decals is the better entrypoint for neophytes. But if you’re only going to buy one Captain Beefheart album, you might as well buy those brown shoes right now and be done with it.

The songs on Decals are generally shorter; only the last song, Flash Gordon’s Ape, breaks the four-minute mark. Instead of poetry taped on a field recorder, you get guitar instrumentals to break up the songs. The highlights on Decals are just as high as before: Lick My Decals Off, Baby; I Love You, You Big Dummy; Woe-Is-Uh-Me-Bop; Space-Age Couple. And there are songs that sound like they could have come straight from Trout: The Clouds Are Full of Wine; Doctor Dark; Bellerin’ Plain. At fifteen songs (including three instrumentals), you feel like you’re getting an album-and-a-half in under forty minutes.

The wonder of this album is that it inhabits the same strange wonderland of Trout Mask Replica. Instruments careen into each other, tantalizing melodies appear and disappear, clarinets are assaulted, brooms are played, a smokecloud of chaos rises from the scorched earth and, through it all, the mad prophet speaks in strange rhymes of odd times. They don’t make music like this anymore, they never did, and even Beefheart didn’t after. So don’t waste your money on another pair of brown shoes. Buy Trout Mask Replica and Lick My Decals Off, Baby and get yourself a nice Fedoura while you’re at it.

All songs written by Captain Beefheart.