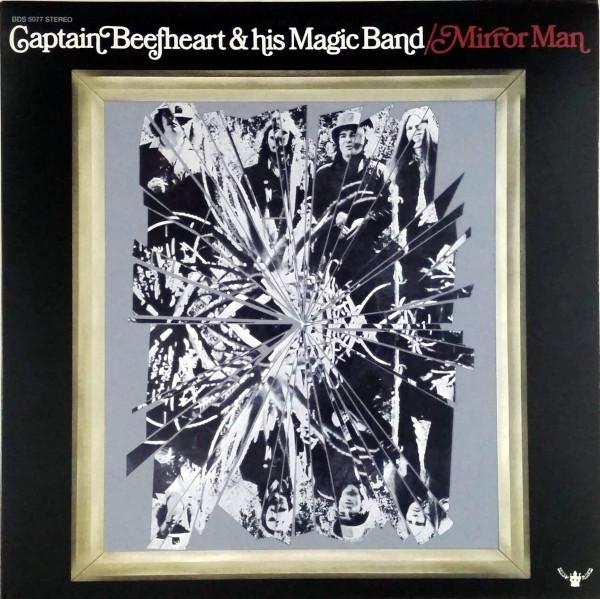 Recorded in between their first and second albums, this is four thick, meaty slices of classic Beefheart blues-rock dementia.

This is the last, sweet feast of madness before convention crept into the mind of Don Van Vliet and he began making music that sounded, relatively speaking, normal. Recorded prior to Strictly Personal and originally intended for an album to be called It Comes in a Plain Brown Wrapper, the music of Mirror Man represents Captain Beefheart’s early, insane blues phase. Is it a cash grab by Buddha to capitalize on Beefheart’s rising profile? Yes, probably. Does it matter? No, it doesn’t, because there isn’t enough prime beefheart in the world to go around.

Calling this “blues music” is misleading in the sense that it doesn’t adequately communicate the musical adventurousness of Beefheart. Yet the blues has always been a solitary journey, whether it’s one man and a guitar commiserating over a lost love or one madman and a few lost souls divorced from reality in the desert lamenting the lost significance of reason. Maybe “post-modern blues” is a better description, since Beefheart’s music works best against the decaying backdrop of an overpopulated, overstimulated world that had already sacrificed its babies to the red, green and blue god of color television.

The opening Tarotplane captures this perfectly, nineteen minutes of lurid electric blues tumbled and rinsed in a Whirlpool Super Surgilator Agitator (an actual thing) of sound. It’s a testimony to the band’s inventiveness that at no point during those nineteen minutes do you feel bored, especially when Beefheart unexpectedly whips out his bagpipes (technically, the musette de cour) for some improvisational soloing. The world definitely needs more distortion-drenched bagpipe solos. Kandy Korn, one of the highlights of Strictly Personal, is reprised here in a longer and, in some ways, stranger version. If this music gives you a sugar rush, you owe it to yourself to check out Pere Ubu.

25th Century Quaker is more crazy, strung-out blues-rock that improbably finds middle ground between Devo, beat poetry and a strangled goat. Mirror Man is the original and glorious 15-minute version of “Son of Mirror Man Mere Man” from Strictly Personal. As with all these songs, Jerry Handley (intentionally misspelled as “Handsley” on the original version) plays the straight man on bass while John French (Drumbo), Jeff Cotton (Antennae Jimmy Simmons) and Alex. St. Clair Snouffer (his real name) twist the arrangement apart like taffy and Beefheart drifts between poetry and insanity. The effect of chopping up his voice to make it unintelligible in spots is just mind-bendingly awesome, a kind of musical self-mutilation.

At the fearful end of the twentieth century, Buddha re-released this as The Mirror Man Sessions and added five outtakes. That’s right: they’re outtakes from an album of outtakes, which in the strange world of Captain Beefheart makes perfect sense. Despite its dubious origins as an album of  unreleased early songs, Mirror Man is nearly as essential as the band’s first four “legitimate” albums. True, there are only four songs on it, some of which were tightened up for Strictly Personal, but the quality of the playing clearly marks it as classic Beefheart and no fan should consider their collection complete without it.