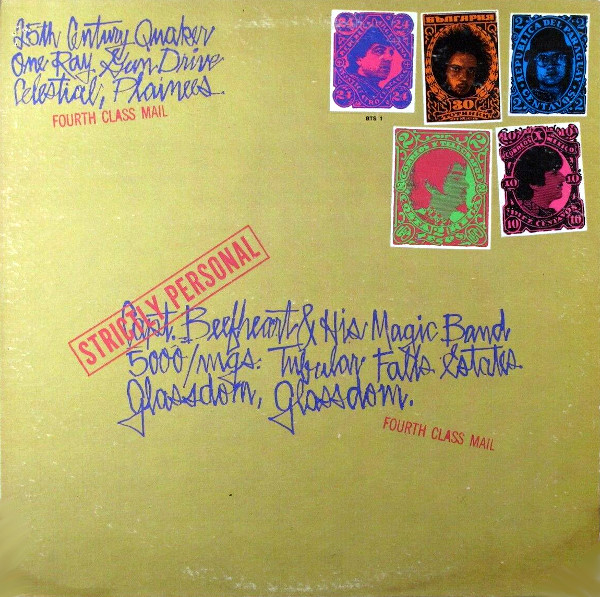 Another love letter to the blue and the bizarrre, mailed from the remotest edge of reason.

Kronomyth 2.0: A small package of value will come to you shortly.

“Reading haiku
I am unhappy,
longing for the Nameless.”
– Allen Ginsburg, from “Haiku.”

I don’t give a sh*t for the blues. It’s like the musical equivalent of the haiku: sublime in its simplicity, but only if you buy into the idea that art has to be reduced to its purest, simplest form to communicate anything of power. I’ll take a little Lewis Carroll in my tea any day, thank you. Strictly Personal, Beefheart’s second album, embraces the nameless. It’s an unloosed Id running wild in a candy store of musical ideas: bottleneck slide, primal screaming, discombobulated rhythms and fitful grooves trapped in a gelatinous mass of psychedelic sound like chunks of fruit.

The opening track purports to be the blues in its purest form, but it’s a red herring. Beefheart doesn’t really care about the blues; he’s an artist and a junk collector who happens to have a lot of blues on his palette, but it’s only one color in a regurgigated rainbow of surreality. You could argue that paranoia is a more important component of his art than the blues, or jugband music for that matter. For me, Strictly Personal has always held terrifying implications: “Trust Us” and “Son of Mirror Man Mere Man” tap into a nameless fear that our own sanity is tethered to our limited vision of reality and that, if we were to open the lens to a greater vista of potentialities, we too might drift away on the Captain’s crazy balloon ride.

I understand the temptation to view Beefheart as a blues champion; relatively straight songs like “Gimme Dat Harp Boy” show an uncanny facility for the blues. But wanting Beefheart to play it straight is like expecting a fish to sing; it only happens in fairy tales. As for the psychedelic production from Bob Krasnow, I think it reaches sublime heights on the closing “Kandy Korn,” and I’ll pick sweet yellow and orange over the bitter blues nine times out of ten.

All songs written and arranged by Don Van Vliet.

Released on mono and stereo elpee in October 1968 in the US (Blue Thumb, BTS-1 on black label) and the UK (Liberty, LBL/LBS 83172 with different labels) with gatefold cover.

[Review] Captain Beefheart and His Magic Band: Safe As Milk (1967)