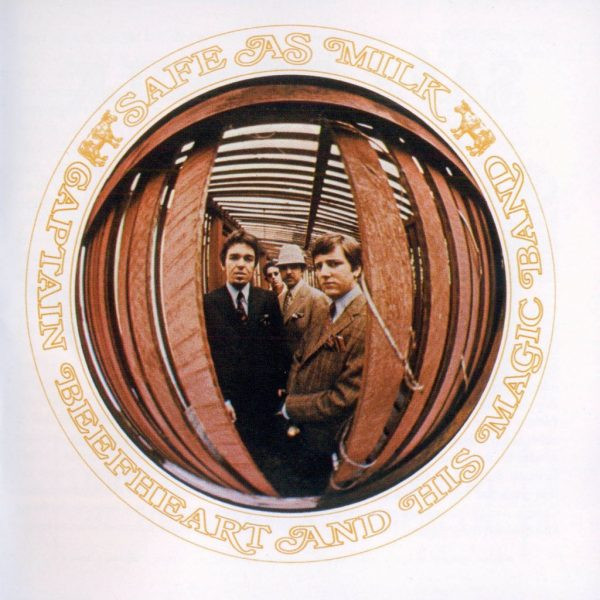 What do you get when you mix a poet, an artist, a talented band of blues-rock crazies and drugs? Clue: it ain’t milk.

Kronomyth 1.0: The fallow land, the untilled farm produces only milkweed at best.

The yellow brick road of rock and roll, it turns out, leads to a madman’s shack in the Mojave desert strung with barbed wire and faded shrines to lost gods. That’s the sense you have listening to Safe As Milk today: that you shouldn’t be here and yet every step has led you to this unlikely crossroads of music, madness and more than a little marijuana.

The polite thing to do, it seems, is not to stare at the human trainwreck that is Don Van Vliet and instead point out that the music is far ahead of its time or, more accurately, far out of its time. Van Vliet has the (beef)heart and eye of an artist, tainted with the craziness that plagues many great artists. He is apparently a difficult person to work with, and you get the sense listening to these songs that not one of them was easily birthed, but that each was breached in the brainbox of Captain Beefheart and could only be cajoled out with liberal amounts of unctuous patience from Ry Cooder and the rest of the band. For their efforts, a freakish litter featuring the likes of “Abba Zabba,” “Electricity,” “Zig Zag Wanderer,” “Dropout Boogie” and the surprisingly sweet “I’m Glad” was spawned. The lyrics, written by Herb Bermann, are poems placed in Beefheart’s improbable marble mouth and spit out like THC-enriched tobacco juice (which is probably an accurate description of Van Vliet’s saliva at the time).

Once heard, Safe As Milk isn’t soon forgotten. Reference points in 1967 for this music were hard to come by; a reverent (versus irreverent) Frank Zappa, maybe, or a postmodern deconstruction of Howlin’ Wolf or Screamin’ Jay Hawkins. I would tell you that Safe As Milk is a work of genius, though I don’t believe Beefheart to be the sole source of that genius, but rather a catalyst for it, as the man is more of a musical force than a musician. Maybe that’s the best way to describe this album: a force of a musical nature.