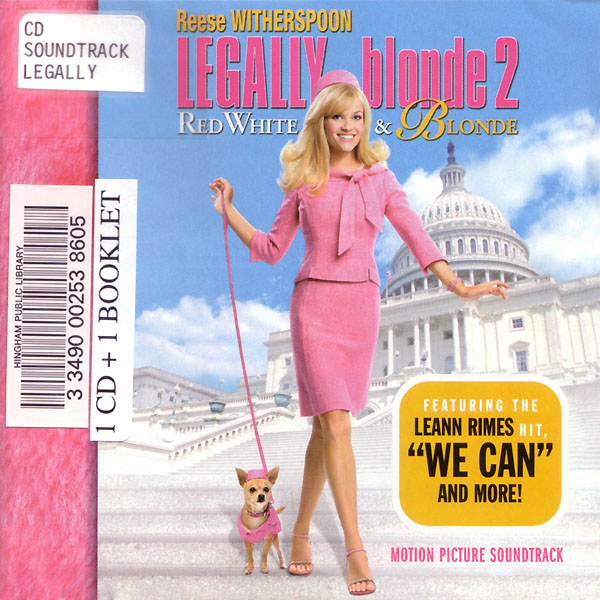 Oddly, either Legally Red or Brunette to a Crisp would be easier to defend.

Kronomyth x.x: Justice is blonde. That would also look swell on a baseball cap.

The sickwell was a feel-good piece of pink fluff, although it’s hard to feel good about a movie called Legally Blonde. Paralegalplegic. Governmentally Retarded. Okay, now I feel a little better about it. The soundtrack vacillates between politics, pumped-up funk and girl power. It’s the latter category, led by Leann Rimes’ “We Can” (a song written by professional tunesmith Diane Warren), that sets the album’s tone. Fresh songs from relative unknowns Hope 7, Superchic(k) and Soul Kid #1 plus the classic “Sisters Are Doin’ It For Themselves” add fuel to the pink power party. From there the selection gets kind of spotty. The inclusion of Lou Reed’s “America” is inspired, John Lennon’s “Power To The People” unimpeachable, but why dig out an old cover from the defunct Candy Skins or a half-assed, stoned-out version of “I’m Just A Bill?”

As with most popular soundtracks, there’s also the obligatory rap song, this one (you guessed it) with a dog theme. Since the single “We Can” showed up on Rimes’ Greatest Hits a few months later, there’s no reason to buy Legally Blonde 2 unless you really need to own the American Mix (and you really don’t, since it just adds a little fiddle and steel guitar). Although a disappointment as popular soundtracks go, the free exposure for Superchic(k) and Soul Kid #1 is a kindness. “More Bounce (In California)” was so good, I added it to my wife’s iPod; kind of The Pussycat Dolls meet The The.