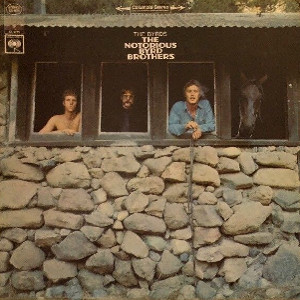 [Kronomyth 6.0]
The Fall of the House of Usher.

“If we had intended to (symbolize Crosby with a horse), we would have turned the horse around.” – Roger McGuinn.

The Notorious Byrd Brothers is completely spaced out. David Crosby and Michael Clarke were simply out. The Byrds’ sixth album marks the end of the classic lineup, even as it marks a fascinating continuation of their classic music into exciting psychedelic areas. The marvel of this record is that the band could move forward creatively even as they were falling apart personally. Gary Usher deserves much credit for holding the sessions together and stitching them up with state-of-the-art studio production, serving as a sort of fifth Byrd (a role that Gene Clark also applied for briefly during the recording sessions). While Crosby probably had to go for the health of the band, his contributions to The Notorious Byrd Brothers are essential—with the caveat that Roger McGuinn and Chris Hillman seem to have taken the essence of his songs and altered them, since it’s unlikely at this stage the three collaborated on songwriting. “Draft Morning,” “Tribal Gathering” and “Dolphins Smile” are quintessential Crosby at their core: free and mysterious and powerful. They’re balanced by psychedelic pop songs co-credited to McGuinn and Hillman that rank alongside their best work. “Artificial Energy” is a tripped-out tune with horns that reveals the influence of Sgt. Peppers/Satanic Majesties, and would have almost certainly been banned by the BBC for its references to amphetamines and killing the Queen. You have to wonder if the band didn’t write the song in reaction to the BBC. “Get To You” is perhaps the sweetest song they’ve ever written, kind of a cross between an Irish folk song and a minor-key pop masterpiece. “Old John Robertson” shows that the band doesn’t need to pilfer from the past to play great folk music (in an odd twist, I would have liked to hear Bob Dylan do a version of this). Where Younger Than Yesterday made a conscious shift toward country-folk (notably in the contributions from Chris Hillman), The Notorious Byrd Brothers shifts again into the psychedelic. Hillman’s “Natural Harmony” sounds nothing like “Time Between,” and the band’s earlier Beatles comparisons, which landed closer to the acoustic side of Rubber Soul, now sound like the electric experiments of George Harrison (“Change Is Now”). (The comparison is even clearer on “Moog Raga,” an instrumental that was appended to the 1997 expanded reissue.) The album once again ends on a strange note, the space/sea chanty “Space Odyssey.” It’s become a Byrds formula to grab the listener with a powerful opening track and leave them scratching their heads at the end. While I don’t believe in a “best” Byrds album (they’re all different, they’re all good), The Notorious Byrd Brothers is an amazing last ride into the technicolor sunset.