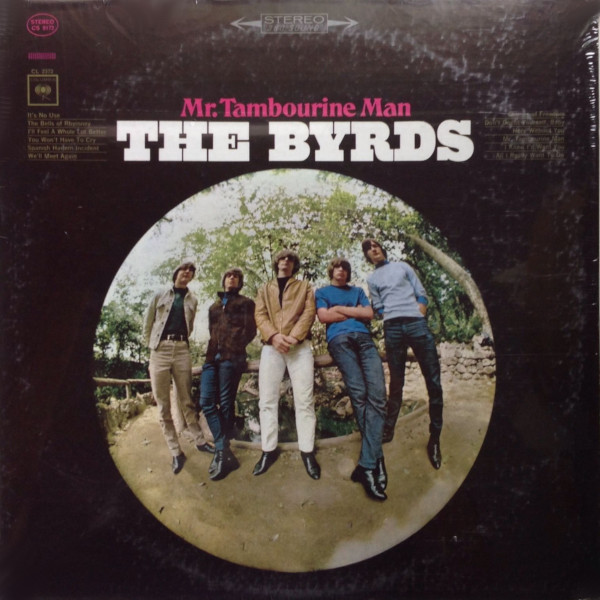 With the blessed benediction of the Bard himself, The Byrds set out to change the shape of American rock music.

Kronomyth 1.0: The Byrds and The Beatles.

I’m not saying that The Beatles didn’t influence The Byrds. I’m not saying that at all. But The Byrds influenced The Beatles too. It’s in the countryish sections of Rubber Soul and the psychedelic experimentation of Revolver. When The Byrds released their first single, “Mr. Tambourine Man,” Bob Dylan had just dropped a bomb on the music world with Bringin’ It All Back Home. The Byrds were the blitzkrieg that followed, taking Dylan’s vision for the future to new electric heights.

The opening moments of “Mr. Tambourine Man” are more than a mere introduction, they’re a musical manifesto that brought the intellect and irony of the folk movement kicking and screaming into the realm of rock & roll. What follows are a few more Dylan songs to establish the new band’s pedigree: a great version of “Chimes of Freedom,” a good if straight version of “All I Really Want To Do” and a forgettable version of “Spanish Harlem Incident.” It’s a bit much, but the benediction of Bob Dylan wasn’t something to slight. Even on the remaining material, Jim McGuinn affects a nasally twang that instantly evokes Dylan.

If the Dylan covers were all the band had to offer, Mr. Tambourine Man would still be an historically important album. But the original material is even better, featuring some of the most beautiful vocal harmonies this side of The Everly Brothers. As a songwriter, Gene Clark suggests a slightly younger Roy Orbison in the dark observations of “I’ll Feel A Whole Lot Better” and “Here Without You.” McGuinn’s songwriting is more clearly patterned after The Beatles, particularly the rocking “It’s No Use.” Rounding out the record are three very different and very interesting covers: Pete Seeger’s “The Bells of Rhymney” (the album’s most serious moment), Jackie De Shannon’s “Don’t Doubt Yourself, Babe” and a playful reading of “We’ll Meet Again,” popularized in the film, Dr. Strangelove.

The Byrds, like Bob Dylan before them, saw music as a platform for big ideas. They also sought to connect their generation’s voice to the folk protesters of the previous generation (e.g., Pete Seeger, Woody Guthrie). Mr. Tambourine Man quickly vaunted The Byrds into the rarefied ranks of serious musical artists. Half a century later, listeners still return to come under its dancing spell once more.