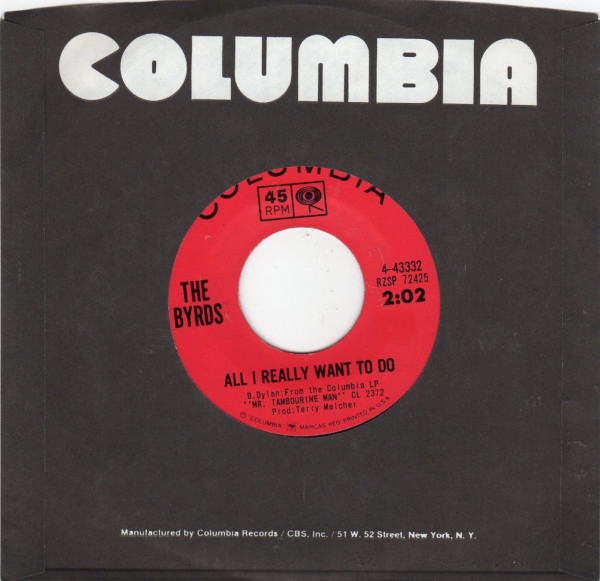 It ain’t as good as Cher’s version, babe.

Kronomyth 1.01: Another side of Bob Dylan, sigh.

The second single from The Byrds has always troubled me because the better song, the original Byrds song, is on the B side. “Mr. Tambourine Man,” well, that was a musically and historically important moment. It showed that America could find a way forward from Dylan’s beat/folk poetry and rock scratchings to rich studio rock music on a par with The Beatles, even if it borrowed a page and a pageboy haircut from them. “All I Really Want To Do,” on the other hand, seemed to miss the point of the original by gilding something that was meant to be rough and ragged. Not only was it vastly inferior to the Dylan original, it was inferior to the version Cher released at the same time.

“I’ll Feel A Whole Lot Better” is a whole lot better. Written by Gene Clark, the member who looked least comfortable in his moptop, it’s a clever sendoff to a love gone sour, the sort of sly number you’d expect from the bard himself but more musical. As Cher showed, anyone could spruce up Bob Dylan songs, but few bands could make you feel good about a bad relationship. Years later, Tom Petty recorded a great, straight version of this for Full Moon Fever with Jeff Lynne, which brought the whole Byrds/Beatles influence thing full circle. Shortly after the release of this single, Columbia re-issued “Mr. Tambourine Man” and “All I Really Want To Do” together as back-to-back Bob Dylan hits by The Byrds.