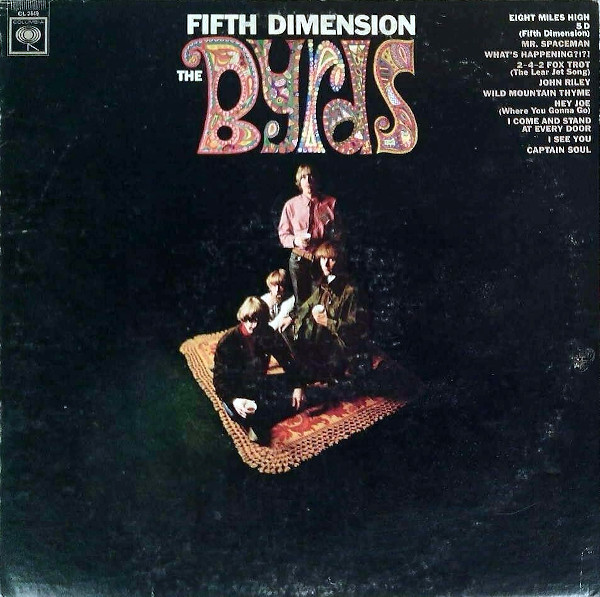 The band’s first album without a full-time Gene Clark crosses into some spacey territory with occasionally stunning results.

Fifth Dimension is a transitional record, and not everyone likes change. Many critics, it seemed, wanted The Byrds to continue making lush, harmonic folk/rock music and serve as Bob Dylan’s personal confectioners. But the band was still growing individually and collectively. They were dropping acid, listening to John Coltrane and Ravi Shankar and, in the case of Jim McGuinn, seeking personal enlightenment. On top of that, you had the usual musical intrigues, resulting in the departure of their producer, Terry Melcher, and their primary songwriter, Gene Clark.

Despite the turbulence, The Byrds reached new heights on the single, “Eight Miles High.” Written and performed with Clark, that song helped usher in the progressive rock movement with its ambitious arrangements, particularly McGuinn’s lead guitar, which literally (if appropriately) defied space and time. Clark’s departure also created an opportunity for David Crosby to discover his cool, contributing the jazzy “I See You” (later covered by Yes on their debut album) and the sweetly succinct “What’s Happening?!?!” Not that The Byrds had ceased being a folk-rock band. Covers of “Wild Mountain Thyme” and “John Riley” (both featuring questionably tasteful orchestration from new producer Allen Stanton) and a powerful anti-war poem set to music, “I Come And Stand At Every Door,” feature slightly thinner harmonies than the past, but still impress.

While hitting some very high highs, Fifth Dimension is an uneven record. “Mr. Spaceman,” the record’s third single, is better suited to The Monkees than The Beatles, their cover of “Hey Joe” feels like the blues on amphetamines and the instrumental “Captain Soul” is an unnecessary trip. While the cool reception from critics didn’t help the record, the real undoing of Fifth Dimension may have been its association with the burgeoning drug culture. Both the title track and “Eight Miles High” were conjectured to be veiled drug references, resulting in the album’s first two singles being banned by some radio stations. (The magic carpet ride album cover probably didn’t help matters.) The closing “2-4-2 Fox Trot,” featuring plane sounds and cockpit recordings, could be a parting shot at Clark, whose fear of flying occasioned his departure, or simply the natural ending to a strange trip.