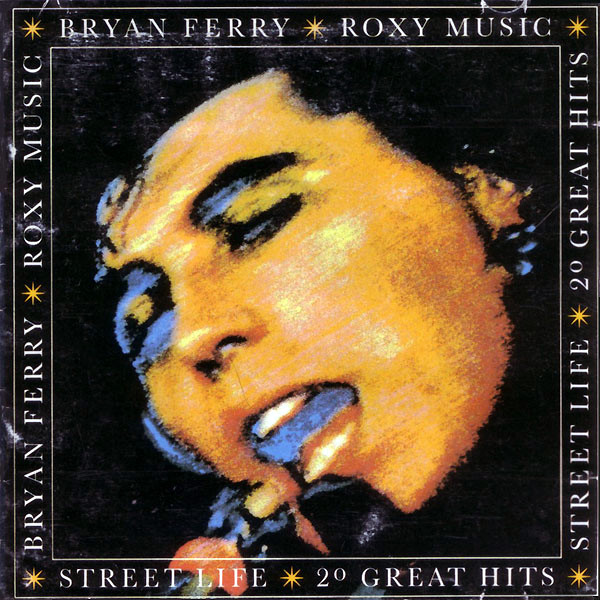 This Ferry/Roxy compilation topped the UK charts, proving that fans were still carrying a torch for their favorite torch song singer.

The tendency to view Roxy Music as an extension of Bryan Ferry’s solo career is something I’ve never understood. There’s not a Best of Sting & The Police, David Byrne & Talking Heads or Lou Reed & Velvet Underground floating around out there, after all. This misunderstanding seems to be perpetuated by latter-day Roxy fans; the same sort of people who would ignore Roxy’s best album, Country Life, and lionize their worst, Flesh + Blood. (Cough.)

However, in their defense, Ferry’s concurrent solo career with Roxy Music was never a second marriage so much as an ongoing affair, and fans have long sought to reconcile the two. Could the man who gave us “The Bogus Man” and “Triptych” really have harbored an affection for Tin Pan Alley songs? Street Life shows us that the same revisionist spirit was at work in both. Ferry’s terrifying version of Bob Dylan’s “A Hard Rain’s A-Gonna Fall” is revealed to be no less iconoclastic than “Virginia Plain” or “Do The Strand.” Splitting time between his solo and Roxy recordings in roughly chronological order, we see Ferry smoothing out the rough edges, inching toward the romantic figure he seemed to satirize in the beginning. Perhaps Bryan Ferry was always a romantic figure, since revolutionaries at their core are romantics.

Choosing “Street Life” as the title track shows it to be something of a fulcrum on which his musical oeuvre rests. The song represents one of the last times that Ferry would really get his feathers ruffled (“Casanova” notwithstanding). With Siren, the balance of Roxy shifted toward romanticism, as the separation between the sincere, solo romantic (“Smoke Gets In Your Eyes,” “These Foolish Things”) and the trailblazing band slowly disappeared. While I would quibble with the selection (already have, in fact) and point Roxy fans to the much earlier Greatest Hits, Street Life balances the Jekyll and Hyde of Bryan Ferry and Roxy Music as well as any one disc can do. Also worth noting, the digital remastering sounds remarkably good and brings all of the dark, subtle details in the early music to light.