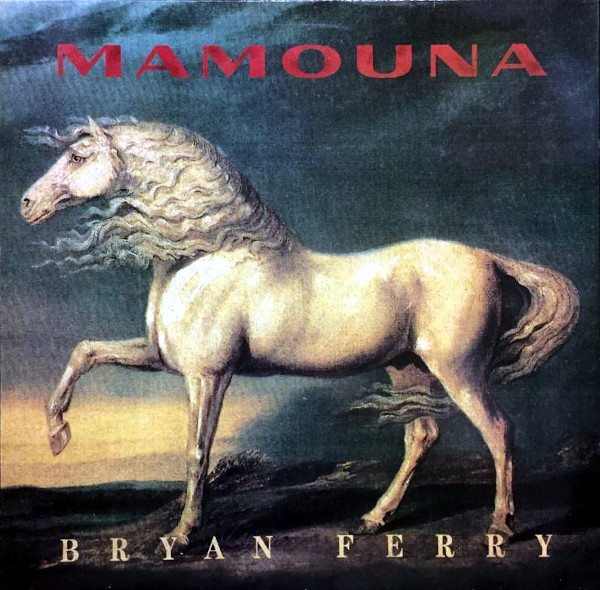 A safe bete if you liked his last album, this time with Eno and rockin’ Robin Trower in the mix.

Kronomyth 9.0: Another fine edition of Ferry.

Bryan Ferry returns to the role of world-weary romantic on Mamouna, but he’s picked up some new tricks along the way, made plain in the opening moments of “Don’t Want To Know.” The electronic effects announce the singer’s intent to infuse his muse with the mix-heavy melange of ambient/techno, underscored by the participation of Brian Eno. And the Roxy reunion doesn’t end there: Phil Manzanera and Andy Mackay return on a few tracks as well.

Bryan has never really shaken the ghost of Avalon, choosing instead to bring the original vision into sharper focus over the years. It’s the attention to sonic detail on Mamouna that stands out in my mind; the melodies are otherwise transparent, the vocals lovely but reduced to melancholy mumbling in spots. The guitar parts read like one of Eno’s ambient endeavors: mood guitar, atmosphere guitar, drift guitar, scratch guitar. These drift in and out of music, as do the sultry backing vocalists, found voices, and Bryan’s own keyboards. (Unlike Bête Noire, Ferry writes all the material and plays much of it himself.)

It’s a remarkable world, one that wraps around you like a thick mist and offers tantalizing shapes in the shadows. And then there’s the inseparable beat, the unseen heart in this amorphous entity. At first, Mamouna is captivating, “Don’t Want To Know” and “Your Painted Smile” in particular. But, as often happens with Bryan Ferry, style and substance seem inextricable; “Mamouna” slips past like a cool breeze, “The 39 Steps” dissipates into the darkness much as Avalon’s “The Space Between.” The closing tracks shake the dust from Morpheus’ cloak to deliver scintillating sounds: the warmly rendered “Which Way To Turn,” the invigorating “Wildcat Days,” the surprising “Gemini Moon.” As the mist clears in the waning moments of “Chain Reaction,” we’re treated to a glimpse of what surely must be Roxy’s old ghost, reminded again that the two spirits dwell in the same house.

For some reason, I approach these albums braced for disappointment and walk away resolute in my respect for Ferry’s artistry. If I place this behind Bête Noire, it’s by a nose at best. The two are both solid works, and I had initially expected to endorse Mamouna (downbeat mood and all), until I reflected that the disc could have been even better. It’s to Bryan Ferry’s credit that I can hold him to such high standards after all this time, but the fact remains that half of Mamouna is merely good. The other half is well worth the trip for any would-be Orpheus, a ferry ride across dark waters to where lost loves loom like shadows.