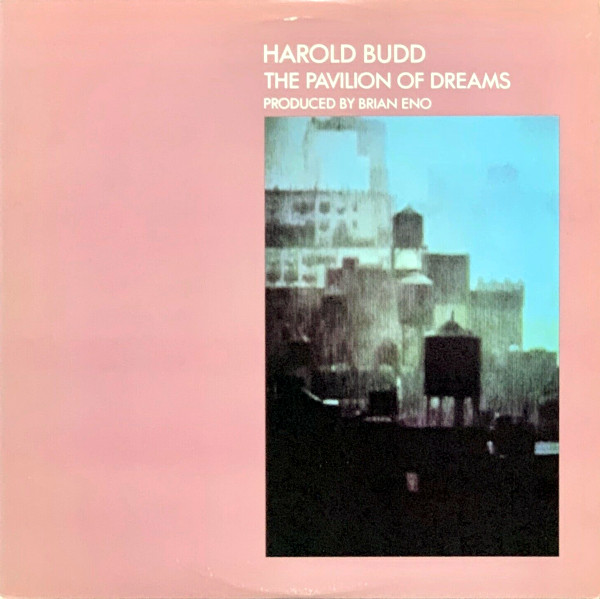 The musical equivalent of watching a lava lamp from the warm sanctuary of your bubble bath.

All forward apologies if you’ve already read my review of this album on Allmusic or encountered bits of it on Wikipedia. The idea that anyone would confuse my opinion with reliable criticism is a disquieting one, and much of the reason why I only write for my own little, humble blog, as no one could possibly visit this site and think it anything but a monument to mania and squandered time.

The Pavilion of Dreams was not my entrypoint into the musical world of Harold Budd, a distinction that belongs to The Plateaux of Mirror. It would make for a nice story to tell you that I fell in love with the music of Harold Budd upon hearing Mirror but, truth be told, I hated that album at first. It cost me $12 (a lot of money for a teenager in 1982) and didn’t sound anything like my other Brian Eno albums. (I would soon come to realize, and eventually accept the fact, that Brian Eno didn’t just make demented pop albums.) Over the months, however, I found myself putting Mirror on the turntable more often than I expected, especially when I was in an introspective or meditative mood. Not long after, I bought a copy of The Pavilion of Dreams. And I hated it.

Pavilion is a collection of works written between 1972 and 1976, following Harold Budd’s first “retirement” from composition. Expecting another Plateaux, I was surprised to find this album used very different instrumentation: harps, voices, a small army of marimbas, vibraphones and glockenspiels. The compositions were longer—in some cases, much longer—than the shorter piano studies on Plateaux, and more informed by jazz (specifically, on the first track, John Coltrane’s later work) than electronic ambient music. And, well, Pavilion sounded an awful lot like muzak to my teenage ears. Don’t get me wrong, I enjoyed classical music from an early age, but this wasn’t classical or jazz or ambient electronica or even minimalism as I understood it (which at that time would have been Philip Glass); it was something different.

Fortunately, in time, The Pavilion of Dreams wove its spell. The opening Bismillahi ‘Rhahman Rhahim’ is a song I’ve returned to often over the years, a lovely and calm oasis of sound that features the same shimmering, undulating effect that has become synonymous with Budd. Two Songs is very different in execution: a duet of mezzo-soprano voice and harp that otherwise features the same compositional style but demands more attention from the listener. The second half, Butterfly Sunday, is an adaptation of a John Coltrane song.

Madrigals of the Rose Angel is another intoxicating piece, and it’s here that I began to think of this music in relation to pointillism. It’s almost as though you’re listening to the harmonious hum of a No Pussyfooting up close, so that the individual dots of sound are discernible. Or it could simply be that my mind has a tendency to wander during minimalist music. The album ends much as it began, with the soporific, peaceful Juno.

Among the Enophenelia I own, Discreet Music is the most calming. But The Pavilion of Dreams isn’t far behind in that department. Harold Budd’s music, as with many minimalist composers, requires faith and a little patience, but the rewards far outweigh the effort. Or, you know, go back to annoying your neighbors by playing THRaKaTTaK at maximum volume. Either way.

All music composed by Harold Budd unless noted.