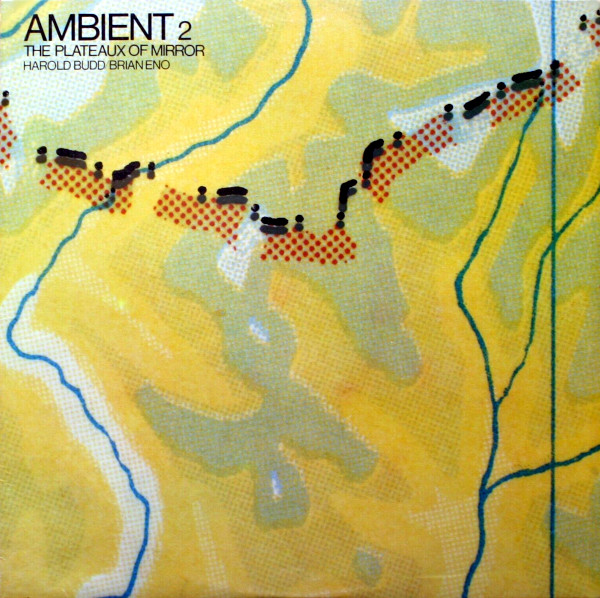 The music of Harold Budd reborn and rediscovered in Eno’s strange and alien world of electronic treatments.

In some ways, this is the album that I expected Cluster & Eno to be: clusters of piano notes suspended in Brian Eno’s electronic dreamworld. In other ways, this is the album that I wanted Music for Films to be: ambient soundscapes stretched from tantalizing strands to miniature, self-standing worlds. The Plateaux of Mirror is one of the most effective partnerships between Eno and other composers. It’s also my favorite Harold Budd album. I remember spending hours at the piano trying to replicate these sounds with my foot on the sustain pedal.

The pair’s previous sort-of collaboration, The Pavilion of Dreams, was more of a Harold Budd primer that brought the listener up to speed on Budd’s atmospheric (I don’t believe the word “ambient” existed when Budd started out) compositions. The creation of The Plateaux of Mirror was very different. For the second installment of his Ambient series, Eno set up a sound environment in which Budd could “discover” new sounds, and then added elements (percussion, synthesizers) as needed. The listener shares in this sense of discovery and wonder as Budd’s piano notes roll out in lovely, langorous tones. One gets the sense that time has stopped, that sounds are suspended in mid-air, savored for a moment before floating softly, slowly to the ground. (One also gets the sense that somebody should punch me for writing that sentence.)

The opening First Light introduces this notion of suspended beauty, opening the curtain on their shared dreamworld, with Eno’s sublime synthesizers (shades of Discreet Music) joining Budd’s piano in mid-flight toward the end of the piece. Steal Away is a short piece that feels improvised, but The Plateaux of Mirror is an amazing world of sound. Featuring a small forest of percussion, you get the sense of standing in a tropical forest at dusk. Above Chiangmai feels like Budd searching for his way in Eno’s world, and it was here that the Alice in Wonderland image occurred to me. The first side closes with An Arc of Doves, which could be seen as a much calmer, almost soporific approach to the instrumental side of Low.

The second side begins with the only track to feature voices, Not Yet Remembered. Eno conjures an angelic choir that oddly reminds me of 10cc’s “I’m Not In Love” while Budd’s piano gently seesaws in the background. The Chill Air sounds exactly like you’d think and points forward to the music of Apollo. Among Fields of Crystal is one of the few instances on the album where Budd seems to use a pre-planned melody, and might be the peak of this Plateaux. Wind in Lonely Fences is one of two tracks that feature electric piano, and again evokes its title perfectly. Failing Light is the gentle closing of the curtain, the bookend to a collection of dreams now half-remembered.

As I’ve mentioned elsewhere, I thought this album sucked when I first heard it. Hard. I was barely a teenager listening mostly to what then constituted punk music (The Stranglers, Buzzcocks, The Clash, Iggy Pop) and didn’t have time for an album that sounded like the musical equivalent of a bubble bath. As I got older, however, I began to appreciate the importance of time. I slowed down and listened to this album, and it soon wove its spell over me. It’s been a constant companion ever since. If you’re entering the world of Harold Budd for the first time, let the journey begin here.

All compositions written by Harold Budd and Brian Eno unless noted.