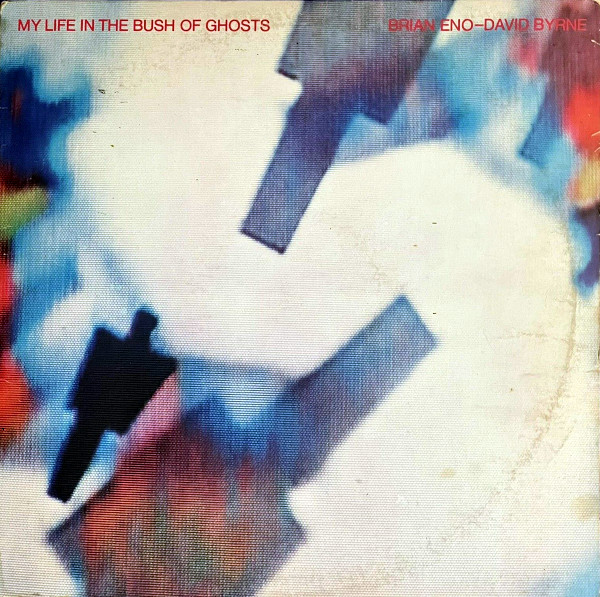 A kind of Remain in Blacklight as Eno and Byrne re-imagine a psychedelic postmodern third world.

The professor and his star pupil get mixed-media, multicultural medieval on My Life in the Bush of Ghosts. This collaboration between Brian Eno and David Byrne actually pre-dates Remain in Light and might have stolen some of that album’s thunder had it been released earlier. Instead, it appears as a kind of bizarre postscript to Remain in Light that extends the whole musical-nomads-meet-no-wave experiment past all logical boundaries.

Much has been written about this album already, sprinkled with fancy words that suggest you, the reader, are in the know by merely knowing about this album, and I won’t deny the feeling that, in the act of listening to My Life, you may feel as though you’ve been ushered behind the curtain to partake of life-changing truths. At least, that was my impression as a teenager. You’d glimpsed these things before in “I Zimbra” and “Houses in Motion,” but even they didn’t prepare you for the shock of hearing America Is Waiting or The Jezebel Spirit mix right-wing radio and recorded exorcisms with post-modern, minimalist funk.

It’s tempting to speculate on where Eno’s influence ends and Byrne’s begins. Certainly, the pop hooks hidden in “America Is Waiting” and Help Me Somebody owe their origins to David Byrne, just as Eno’s touch is keenly felt in the thick musical textures of Mea Culpa and Regiment. Several tracks sample from the same album, The Human Voice in the World of Islam, and one of them, Qu’ran, was removed at the request of the Islamic Council of Great Britain and replaced with Very, Very Hungry. I will confess, there is a hint of musical elitism (or colonialism?) at work in My Life in the Bush of Ghosts, however subtle and perhaps even unconscious, that has always left me a little uncomfortable. For tantalizing glimpses of the future such as these, squirming is a small price to pay.

Although you can find some precedent for this music in the work of Brian Eno, Talking Heads and Holger Czukay, most of My Life in the Bush of Ghosts is prescient and would have an audible influence on the work of Peter Gabriel, Kate Bush and others. In my opinion, this is the peak of the artistic pairing of Byrne and Eno. The way that this album uses voices (Eno has alluded to his replacing the role of singer with curator on this record), mixes modern and primitive sounds together (something that Jon Hassell apparently took umbrage at) and seems to magically reinvent itself on each track is stunning. The painstaking detail and sheer joy of creation are evident on every inch of this record, to the extent that not a single drop of it should be allowed to spill from the speakers untasted.

There are very few records that never fail to sound fresh when I hear them, and none of them continue to reveal as many new discoveries as My Life in the Bush of Ghosts.

All songs written by Brian Eno/David Byrne unless noted.

Cover from a video by Brian Eno. Typography by Peter Saville.