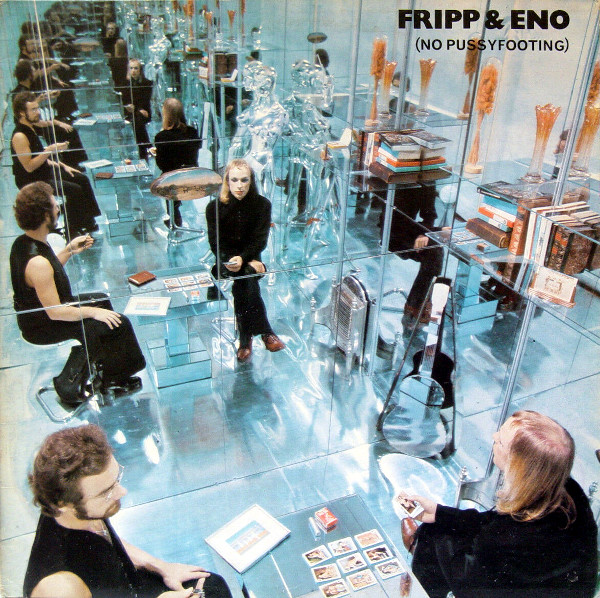 What do you get when you combine the geniuses from King Crimson and Roxy Music? A stultifying album of electronics and tape loops.

No Pussyfooting marked the beginning of a very fruitful collaboration between King Crimson founder Robert Fripp and Roxy Music electronics whiz Brian Eno. There is some of King Crimson’s intensity to be found in Fripp’s guitar leads, but otherwise the side-long pieces on No Pussyfooting are antithetical to the exploits associated with the pair’s previous work. Using a system of tape loops that builds layers of sound by repeating the same snippets, Eno creates a dense and exotic backdrop of musical texture from which Fripp’s guitar emerges and into which it ultimately submerges.

“The first side of that album took literally 45 minutes to make. Nobody believes that because there were about 50 guitars on it and it wasn’t doctored or anything.” — Eno, as quoted in a November 1973 Melody Maker article.

It’s an important record, if only because it signals the start of Brian Eno’s ambient experiments, which sought to create music that existed in a space simultaneously rather than follow the linear course most often associated with electronic music. The first piece, “The Heavenly Music Corporation,” actually dates from September 1972, and finds the pair invoking the sound of jets amidst soothing waves of electronics and Fripp’s otherworldy guitar. “Swastika Girls,” recorded one year later, expands the sonic palette to the strumming of taut strings and some buzzsaw guitar leads that compete against an undercurrent of soothing melody.

No Pussyfooting remains an impressive musical manifesto, despite the fact that these sounds have been packaged more succinctly (Evening Star) and explored more fully (Discreet Music, Let the Power Fall) on subsequent efforts. Both sides offer an interesting musical mantra chant, but art rockers beware: only minimalists, ambients and trance fans need apply.