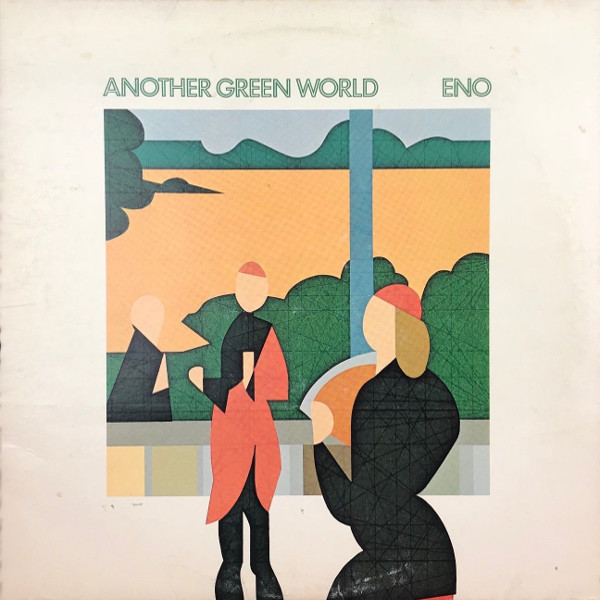 Unreality, solemnity, unconscious continuity. They’re not the sort of words you expect to see in the review of a rock & roll record. And, of course, Another Green World is not a rock & roll record. Instead, it takes the concept of “art rock” at face value, creating musical vignettes that owe more to modern sculpture and pointillist painting than “Love Me Do” or “Jailhouse Rock.”

In every meaningful way, Another Green World is a culmination of Brian Eno’s two musical halves: pop saboteur and accidental/environmental composer. What unifies them is, surprisingly, a sentimentality rarely found on Brian Eno’s records. This can be heard on the peaks that occur on side one (“The Big Ship/I’ll Come Running”) and side two (“Golden Hours/Becalmed”). Here, we’re not treated to Eno the musical archmage in his high studio tower conjuring fantastical monsters, but to expressions of submissive love, uncertainty, longing and peace.

Eno had written wistful pop songs before (“On Some Faraway Beach,” “Some of Them Are Old”), but they were like paper roses strung on barbed wire. What Eno achieves on Another Green World is an emotional connection, using (and here is the album’s crowning achievement) a new musical language. The result is an album that feels very personal and completely alien at the same time.

The stunning opening sequence of “Sky Saw” (which sounds like a holdover from his last record, Taking Tiger Mountain) and “Over Fire Island” (which anticipates the music of Brand X) and the aforementioned peaks are the sum and substance of Another Green World. Remove them, and what you have are accidental instrumentals (“Little Fishes,” “Sombre Reptiles”) and nasally rendered pop songs that are rescued from the brink of ridicule by Robert Fripp’s brilliant guitar solos. Although it may sound like a perfect record, Another Green World is really the beneficiary of a natural genius and felicitous chaos rather than a calculated attempt to make great art (which it ultimately is). In fact, given Eno’s affinity for his Oblique Strategies cards, one might call Another Green World his greatest bluff.

All songs written by Brian Eno.