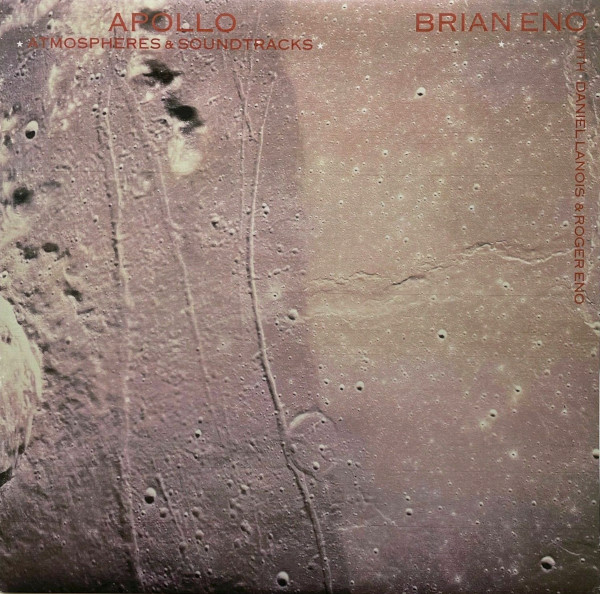 Brian’s soundtrack to the film, For All Mankind, features some truly celestial ambient music.

I remember a friend playing this record for me when it first came out and him being super-jazzed about it and me nodding politely but secretly counting the minutes until I could go home and play Here Come The Warm Jets to flush out the uncomfortable experience of what to me sounded like Brian Eno beating an owl with a rain stick in an empty grain silo. It took me years to appreciate the ambient music of Brian Eno, which came only after forgiveness for what I perceived as mucking up half of Heroes and Low and turning his back on a promising career as a rock artist. It really wasn’t until listening to Discreet Music that the whole ambient thing clicked with me and I realized that music could be static and lovely, suspended in a perfect moment and examined absent of time and space.

Brian Eno created Apollo: Atmospheres & Soundtracks to accompany film footage from the first lunar landing. The music, co-created with brother Roger and Daniel Lanois, captures the alien beauty and stillness of space in a way that Tangerine Dream touched upon but never rested at because of their classical need for thematic development. Tangerine Dream wrote space symphonies, Eno wrote a meditation on space.

Comparing this album to other “space” soundtracks is like comparing 2001: A Space Odyssey to other space movies; both works use the native silence of space to speak volumes about the vastness, coldness and strangeness of the cosmos. Notes resonate in isolation, falling slowly in endless space, forming ice crystals and apparently inducing spontaneous haikus. Unfortunately, about midway through (the dark side of the moon), the soundtrack gets hijacked by a cowboy movie as Daniel Lanois breaks out his steel guitar (Eno had earlier shown a predilection for maudlin country music on “Everything Merges With The Night” and “Here He Comes”), and only in the closing “Stars” does the record return to its original state of space-grace.

If you’re listening to this on a programmable CD player (which I realize is now as antiquated as a turntable), just skip through tracks eight through eleven. Artists through the ages have tried to capture the otherwordly beauty of the moon; few have done it was well as Apollo. Owl never hear the moon the same.