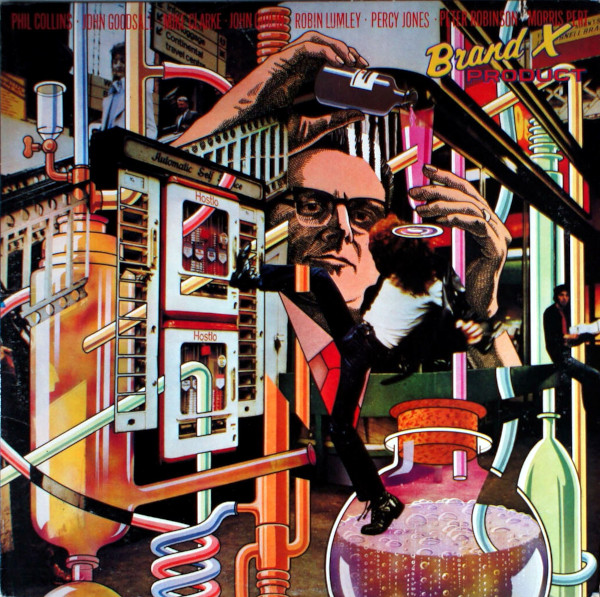 This is where it gets kind of weird, like when a long-lost husband returns home to find his wife in bed with another man and suggests a menage a trois. You see, Phil Collins and Robin Lumley had sort of left the band, but then they came back for Product, only to find Mike Clarke and Peter Robinson were already wearing their pajamas, so Phil and Robin formed their own version of Brand X with John Goodsall and fretless bass player John Giblin and recorded most of an album together. The remaining members of Brand X (Percy Jones, Morris Pert, Peter Robinson, Clarke & Goodsall again) also recorded new material, and the whole thing was mashed together for Product. Oh, yes, and Phil Collins sings! So you have half an album each from two parallel versions of Brand X that runs the gamut from progressive pop (“Don’t Make Waves,” “Soho”) to Pat Metheny-styled jazz (“Rhesus Perplexus”) to Jaco Pastorius-patterned punk jazz (“Not Good Enough—See Me!,” “Dance of the Illegal Aliens”).

The jumbled album cover is fair warning of what’s inside: a motley assortment of musical ideas that are individually impressive but collectively confusing. Maybe it’s the natural byproduct of too many cooks in three different kitchens, but this has always been a difficult album to digest. That said, the results are interesting, especially where Phil adds a little dab of Abacab to the proceedings. You probably don’t need to own this album (I hardly dust it off these days), but you should hear it at least once, if only to satisfy your natural curiosity at hearing Phil Collins sing lead vocals for a band other than Genesis. (Although, where that topic is concerned, seek ye Anthony Phillips’ The Geese & The Ghost first.) I also wrote a review of this for Allmusic, in case you can’t possibly get enough of my middling, milquetoast opinion on things.