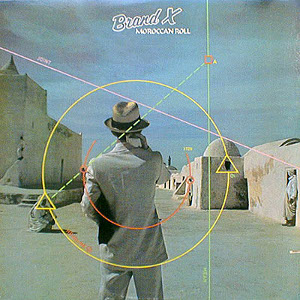 An Eastern shift where John Goodsall plays the sitar and the band’s sere and sinewy sound is interrupted by islands of calm collapsar and furious virgens. Moroccan Roll is more agitated than Soft Machine at this stage, less than Bruford, left of Weather Report. Twice it settles into smokeclouds that would’ve made Mike Ratledge smile: “Disco Suicide” and “Malaga Virgen.” Phil (why aren’t I working on a solo album?) Collins sings on this one, sort of. No words, but “Maybe I’ll Lend You Mine After All” could be seen as a harbinger of “Droned.” I’m rating this one right up with Unorthodox Behaviour now because the band meshes so well together. Jones’ fretless bass is still the most spicy element, Morris Pert’s (welcome aboard) percussion the most exotic. (His touches to “Malaga Virgen” make her what she is.) Compositionally, Goodsall’s three tracks are the strongest. The space funk fusion of “Hate Zone” is a highlight; “Macrocosm” and especially “Sun in the Night” carry the Eastern vibe from end to end. Moroccan Roll is the driest of the early studio albums, but if you own Unorthodox Behaviour and Masques (and why wouldn’t you?), this is moradasame. A true desert of the senses, noting that to the trained eye there are lots of things to see in the desert. Since that doesn’t exactly describe this album, I’ll add “bruford in baghdad” and be done with it.