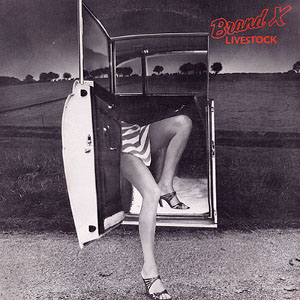 The live adventures of the mathematically minded and mellow-eastern Brand X. Livestock is one of the most subdued-sounding live albums I own; percussion percolates, basses bubble, keyboards creep and guitars growl in this arid, exotic landscape. Concert albums that feature new material (as this does) are interesting animals, and a very different animal than The Bruford Tapes. Bruford’s live album was raw, raucous and familiar. Livestock is a calculated exploration of old terrain and new lands. It’s a little like getting half a new album with some live versions tacked on, as close to an EP as sits on the Brand X shelf. Thus it’s the least essential of the first four albums. The timing of its release is also questionable. Was the clamor for another Brand X album so great after six months, or did Charisma see Livestock as a last opportunity for the band to cash in on Collins’ cachet? Collins himself is replaced by Kenwood Dennard on two tracks, perhaps because of conflict with the Wind & Wuthering tour, and this does effectively answer the question many people were asking of where Collins’ loyalties would lie when push came to shove. Genesis came first, Brand X second, and the third album all but stated that. So Livestock is at the same time a short celebration and a slight hissing of air from the Brand X balloon. After you’ve purchased everything up to Product, looking in Livestock for something to snack on is the logical next step. Personally, I prefer my fusion more explosive. The music of Livestock, like Soft Machine, consists more of gentle eruptions and complex patterns, typical of music constructed by keyboardists and drummers. The subsequent Masques has more soul and spirit, so feel free to skip ahead and save Livestock for another day.

The Players
Phil Collins (drums), John Goodsall (guitars), Percy Jones (bass), Robin Lumley (keyboards) and Morris Pert (percussion) with Kenwood Dennard (drums) philling in for Phil on two tracks. The 21-year-old Dennard had graduated from the Berklee School of Music only one year earlier. Produced by Brand X and engineered by Jerry Smith.