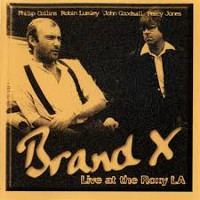 Kronomyth 9.3: PRODUCT MARKETING. This is a soundboard recording from one of Brand X’s shows at L.A.’s Roxy Theatre, recorded shortly after the release of Product. The sound quality is slightly better than a bootleg, but not nearly up to the standard of the official Livestock. As an historical document, it’s interesting to hear Phil Collins and the band ham it up with silly asides before launching into lifelike versions of not-so-old favorites plus new songs from the just-released Product. The group did a limited tour of the UK and US to support Product, using the same setlist from night to night and alternating between “Nuclear Burn” and “Access To Data/The Ghost of Mayfield Lodge” as the encore. If you’ve exhausted all of the official releases and are looking for something to nibble on late at night, Live At The Roxy L.A. has its appetizing moments.“Dance of The Illegal Aliens” and “Nuclear Burn” (the encore for the evening), for example, seem to take on a life of their own on stage. To date, I’ve only seen the one official live album (Livestock) and two shows from the 1979 tour preserved (the second was at NYC’s Bottom Line). If you want to experience the band’s live shows, Live At The Roxy L.A. gives you a more authentic experience than Livestock. It’s muddy, sure, but history shouldn’t be handled with white gloves.

The Plastic
Originally recorded on September 23, 1979 at the Roxy Theatre in Los Angeles, released on CD in 1996 in the UK (Zok Records, ZCDBX010). Photography by David Warner Ellis and Terry Lott.