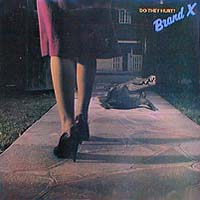 Kronomyth 6.0: BRANDAMAGE. The two factions of Brand X did a little more tinkering in the interim, as if anyone actually cared who played what with whom anymore. The big difference here is that Percy Jones and Phil Collins are now split into different groups. Oh, and that the songs now suck. That would be the other big difference. Do They Hurt? is exactly the kind of wanky instrumental music that gives jazz fusion a bad name: pointlessly popping bass notes, crisp and sterile percussion, clashing keyboards and really annoying vocals (Percy Jones singing backwards on “Noddy Goes To Sweden,” John Goodsall singing unintelligibly into an old toaster or some such electric apparatus on “Act of Will”). At its best, Do They Hurt? sounds like outtakes from earlier, better Brand X albums (“Voidarama,” “Cambodia”). That’s really the best you can hope for: a few breaks where you don’t want to cover your ears and shout “Stop screwing around and play something!” It’s clear at this stage that Brand X doesn’t know what it wants to be when it grows old: maybe they had it right with “Euthanasia Waltz” all along. Was it really only two years ago that the band seemed ready to embark on a new and brighter chapter with Morris Pert playing percussion? Funny how ties fly when you’re halfing one. Even Monty Python’s Michael Palin, writing in on coconut-white horse, couldn’t rescue Do They Hurt? from the band’s self-destructive tendencies. And so another great progressive rock band goes geritol into that good night.