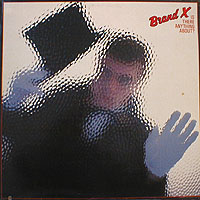 Kronomyth 7.0: BRAND XTINCT. Is there anybody out there? Certainly only the Brand X stalwarts were still in their seats at this stage. The last album from the classic lineup (or three-quarters of it anyway), Is There Anything About? is better than Do They Hurt? and nearly as good as Product—not surprising given that the same group (Collins-Giblin-Goodsall-Lumley) was responsible for most of Product. Since their last album, Brand X had divested itself of Mike Clarke and Peter Robinson (who appears here only on the archival “TMIU-ATGA”) and relegated Percy Jones to one track for a reuniting of the original quartet. Of course, no one really cared about the comings and goings of Brand X in 1982; fusion was dying, Genesis was rising and Phil Collins had just released an album called Face Value. Those loyalists who did tune in for the Brand eXit were treated to some pleasant electric guitar fusion (“Ipanaemia”), a neat Methenyesque number from John Giblin (“A Longer April”) and a leftover studio piece that sounds a lot like Vangelis. Is There Anything About? isn’t the worst Brand X album I’ve ever heard (a distinction that would fall to Do They Hurt?). It is, however, the second worst Brand X album I’ve ever heard.