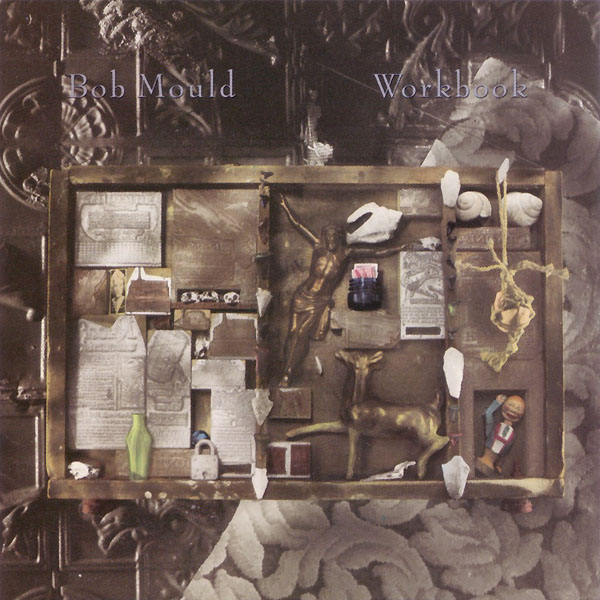 On his first solo album, Bob Mould plays the mandolin, yodels and probably rides a flying pig or two.

What was Bob Mould going to husker du for an encore? Regret, regroup and re-engage on a more intimate level. The opening track, “Sunsong,” is an acoustic guitar instrumental that has more in common with Steve Howe than Steve Jones. It’s the anomaly, the only instrumental on here, but the acoustic guitar never leaves his side.

Instead of Husker Du’s electric wall of sound, Bob Mould is busy tearing down walls on Workbook. He yells, yowls and yodels his way through 10 songs, suggesting a nasally, noisier R.E.M. Yet, without the heavy crush of Husker Du, you get the sense on Workbook that you’re seeing him clearly for the first time.

It’s a personal work, a licking of wounds and a looking back on a wild ride. I tend to see it as Mould stripped down, revisiting old haunts and old idols. Speed these up a little, add the crush of electric guitar and you wouldn’t know hu was husker and hu wasn’t. That said, I don’t recall him ever writing a track as sweet as “See A Little Light,” even if it is bittersweet.

The rest of Workbook is solid stuff, with songs that work their way under your skin eventually. Time heals all wounds, endears the minor victories to us, washes away the grainy vision of punk-pop heaven and reveals athenian angst underneath. Some critics have championed this, others tagged it bitter musings and moved on, while I think it’s much a du about not being hu people expect you to be.

Husker Du was a race against time, Workbook is the walking away from the crash. With a rhythm section of Anton Fier and Tony Maimone and an honest-to-goodness cellist, it’s a classy affair. Maybe classy’s not your thing, in which case I’d wait for the sweet stuff (Sugar).

All songs written by Bob Mould.