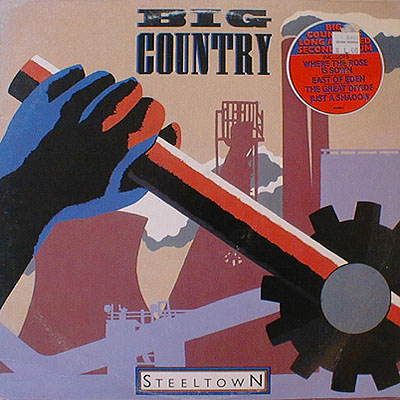 [Kronomyth 2.0]
The best-laid tracks of mice and men.

Big Country’s second album turned out to be stronger than the first; by mid-album (“Come Back To Me”) it’ll give you chills. This is relentless, romantic, self-righteous rock and roll, just the sort of stuff from which legends are made. Or not. The album topped the UK charts, but Steeltown failed to produce a US single of the first’s magnitude (“In A Big Country”) and they were labeled here a one-hit wonder. Their sound is idiosyncratic, with the e-bows and impassioned vocals suggesting an ethnic U2, but after a few listens the songs of Steeltown reveal themselves: “Girl With Grey Eyes,” “East of Eden,” “Where The Rose Is Sown.” Sometimes an album is so strong that it can forge a lifetime of fealty, and Steeltown is that album for me. As much as I liked “In A Big Country” and their first record, it’s here that Stuart Adamson’s genius shines. Steve Lillywhite’s production is more sophisticated, the sounds richer, the material as principled as poetry of a high order. I always hear a theme on this album, like an English Steinbeck novel about a working-class people duped by the movers and shakers into a war they didn’t want. That theme falls apart some on the second side, but the music still stands tall. It’s clearly a fussed-over album with flawless arrangements, dazzling guitar textures and seamless shifts from verse to chorus. If I were making a shortlist of the best albums from 1984, Steeltown would be near the top (so would Echo’s Ocean Rain). Sadly, our heroes arrived in time for the brave new world and we let them slip away. The world needed more strong, brave voices like Big Country then as now, so if you missed Steeltown the first time, it’s worth revisiting.

The Pictures
Sleeve design by J.B. Photography by Brian Aris.