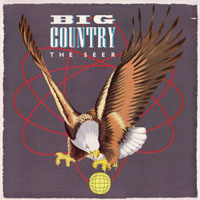 The proper follow-up to Steeltown, The Seer featured a cleaner, crisper sound than earlier efforts. The material is outstanding (as always), the melodies more accessible, the Scottish self-identity still strong but not overpowering. Should’ve made them stars. Instead, The Seer performed only slightly better than their last album, leaving one to wonder what Big Country would have to do to re-ignite American interest. Song for song, The Seer is probably the best thing they’ve done. Their first two records were a little too self-important in spots, but The Seer moves beyond sloganeering to focus on the music. The lean production from Robin Millar tears away the wall of sound and puts the band’s appeal in better light: Stuart Adamson’s voice, the strong rhythms and melodic guitars shine. You could see The Seer as a commercial overture; certainly “One Great Thing” and “Hold The Heart” are more accessible than anything they’ve done so far. The knock on Big Country was the omnipresent e-bow; it made every song sound the same. Not so The Seer. The e-bow isn’t the story any more. It’s in how they change tempos, use different effects, add and subtract sounds sparingly. These aren’t four angry young men stormtrooping through their songbook behind a Scottish banner but four musicians who treat the muse more gently. I couldn’t tell you whether the change came from the band, the label or the producer. I can tell you that Peace In Our Time and this are of a piece in the exchange of the overarching e-bow for space. Steeltown was a difficult work but worth the effort. The Seer is an easier album to know. I warmed up to it almost immediately, and suspect a good half of this will go running through my head for the next few months. If the early stuff seemed heavy to you, seek The Seer and be enlightened.

The Pictures
Illustration by David Da Silva. Sleeve by J.B.