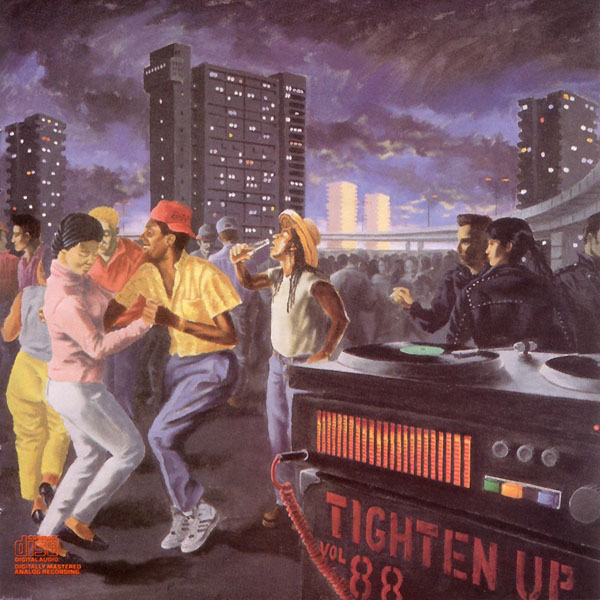 The song “Just Play Music” sort of sums it up, as BAD tones down the multimedia experiment to focus on the music.

The Strummerless third album turned out to be a surprisingly solid collection of songs that downplayed the multimedia elements of the last. As if taking the single “Just Play Music!” to heart, Jones and company place the emphasis on familiar, anthemic melodies and support them with supercharged rhythms and effects underneath. Tighten Up Vol. ’88 might be their strongest collection song for song; “Other 99,” “Rock Non Stop,” “Just Play Music!” and “Esquerita” would make my shortlist if I were compiling a Best of BAD.

The knock on Mick Jones is he’s a junk collector. Who else would bother to recycle the theme to The Beverly Hillbillies (“The Battle of All Saints Road”) or write songs about discarded heroes like Esquerita? Maybe that’s always been the attraction between Jones and FX specialist Don Letts. And it’s always been an element of The Clash, from “The Right Profile” to “Ghetto Defendant.” BAD continues the great border crossing begun with The Clash, inverting the music/media equation slightly with Tighten Up and providing more songs per square inch of plastic than before.

Oddly, their next album (Megatop Phoenix) re-inverted the equation, so I wouldn’t say that Tighten Up is a stab for commercial acceptance. It is one of their most even records, if not their most inspired (No. 10, Upping St. would get the nod there). Some may see it as a step down from the over-the-top Upping Street, but I would tell you that, tightened up to eight songs, the two would be hard to tell apart. (The old review of this included an inane reference to Lenin and toilet paper, and you can guess what I did with that one.)