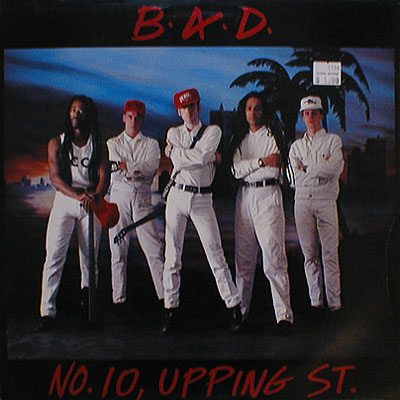 Joe Strummer and Mick Jones, together again. It isn’t a Clash reunion, but it is the best thing either has done since Sandanista.

Kronomyth 2.0: Clash of the tightened.

What the hell is this?! That was my first reaction to BAD, via the video for “C’mon Every Beatbox,” which twisted the melody to “Summertime Blues” into some horrible, multimedia monster: beat box rhythms, audio lifted from films and Mick Jones’ taunting vocals on top of the whole thing. Was he brilliant or just plain bonkers?

While BAD hasn’t turned out to be as revolutionary or influential as Mick Jones might have hoped, they were too intriguing to ignore. No. 10, Upping St. (a reference to the prime minister’s residence) is probably the closest thing to a Clash reunion, as Jones and Joe Strummer produced the record and cowrote some of the best tracks: “Beyond The Pale,” “V. Thirteen,” “Sightsee M.C!” If these don’t grab your attention, nothing in the BAD catalog will. The rest of the record is highstrung and schizophrenic; bits of it’ll impress you, but you’d have to open your mind pretty wide to swallow the whole thing.

The trouble with BAD is that an audience never really existed for this sort of music. Jones and company seemed intent on ramrodding the audience into accepting their vision of the future on faith, when most Clash fans were still clinging to the past. In the world of Big Audio Dynamite, music and media were indistinguishable, reggae rhythms and rock music coexisted peacefully, and everybody wore hats (apparently). In the real world, Big Audio Dynamite was given a small patch of the airwaves similar to PiL for services rendered and allowed to grow long in the tooth like some eccentric uncle when it turned out that their plan for the future was built on clouds. To its credit, this album is played with an intensity as if the future really did depend on BAD, so if you’re inclined to entertain an alternate reality (…They all lived happily ever after, with no one mentioning The Clash again), welcome to No. 10, Upping St. You can even keep your hat on.

Original Cassette Version
A1. C’mon Every Beatbox
A2. Beyond The Pale
A3. Limbo The Law
A4. Sambadrome
A5. Ice Cool Killer
B1. V. Thirteen
B2. Ticket
B3. Hollywood Boulevard
B4. Dial A Hitman
B5. Sightsee M.C.!
B6. The Big V