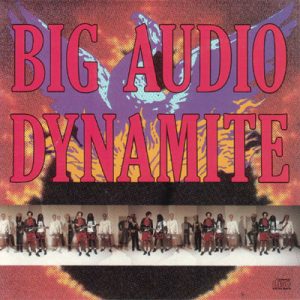 Megatop Phoenix takes the mixed media experiment to new heights. I know, I thought they were moving away from that with their last album, but as the opening “Rewind” concedes, they were working without a map and compass. In retrospect, some sort of manifesto would have helped in understanding what Big Audio Dynamite was after. No one really picked up on the mixed media angle, though a lot of this music could be seen as a harbinger of techno. But were tomorrow’s technobrats listening to this music? If you’re going to make a case for BAD as a revolutionary band, then Don Letts is clearly the Leon Trotsky of this outfit. The snippets that fill the spaces in Mick Jones’ sparse melodies are the musical equivalent of graffiti art. Even the rhythm section seems to take Letts’ cue to become ornamental elements. But at the end of the day, it’s the songs themselves that must take the hill, and they’re simply too sleepy to do it. (OK, no more metaphors, I promise.) If I were compiling a best-of BAD, I’d make space for “Around The Girl In 80 Ways,” “Contact” and “Union, Jack.” If I weren’t cheap about it, I’d throw in “Mick’s A Hippie Burning” and “Stalag 123” to boot. But nothing on here gets under my skin like “V. Thirteen” or “Other 99.” What Jones has come up with are punk lullabies, simple and soporific, and they’re a poor substitute for the punk anthems of The Clash. A lot of people seem to like Megatop Phoenix, and I won’t argue that it’s their most effective melange of media and music. I just wasn’t interested in seeing the two of them wedded in the first place. It kind of makes you wonder what Joe Strummer’s up to.