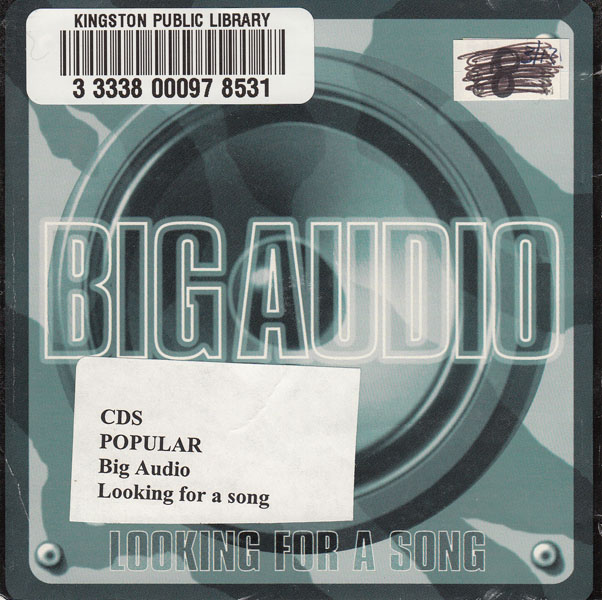 Another sweet song about three-thirty long that doesn’t have an F’ing thing to do with punk music.

Honestly, I believe critics were happy to be rid of Big Audio Dynamite, since most didn’t know what to make of the band to begin with. The classic rock idaltrey, old film snippets, rap and punk rolled together equalled a bad trip for critics who thought the upper clashmen (Strummer, Jones) were going to eat the past and all alternative futures rather than ingest them like some Lovecraftian nightmare. So when Jones and the second batch of BAD (now going by the abbreviated Big Audio) released a formal followup to The Globe, there had to be some grumbling among the groundlings that Banquo’s Ghost had come back for a second helping.

I, on the other hand, would tell you that “Looking For A Song” is one of the brightest moments in what can only be regarded as a spottily stellar career. As if to underscore that point, the five-track CD single was repackaged with a promotional compilation of fifteen hits called Greatest Hits – The Radio Edits. That’s right, the single includes a bonus greatest hits compilation. I’ve seen it done the other way around before (Jefferson Airplane, The Stranglers, Yes), but leave it to Big Audio to turn an idea on its head. Not that the song needed such a complicated thing to sell it. “Looking For A Song” is a charmer: BAD meets The Beatles with the usual gimmickry tossed in for good effect.

The CD single includes a radical Zonka/Shapps remix (the radio remix featured on the compilation is less radical), a carnival ride of a collaboration with stage composer Lionel Bart (who was 64 years old when this was recorded!) and two live songs from Mick Ronson’s Memorial (suffice to say Ronson was the only one dying to hear them). And then there’s that “free” compilation, which does everything you would expect a proper Big Audio compilation to do except cost money. I was a little miffed that they chose a different version of “V. Thirteen” than the album version I know and love, but it’s hard to be angry with a free compilation.