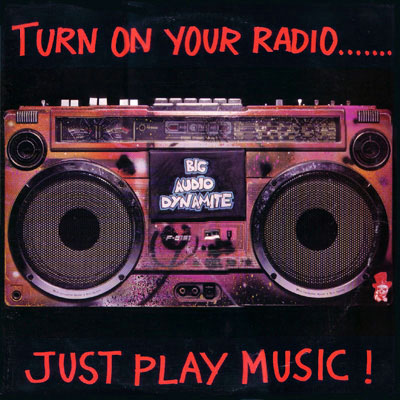 One of the cuter songs over their career, and one more bands should take to heart.

“That’s all I ever wanted, was to not do a proper job. I’m the luckiest guy in the world.” – Mick Jones, in a 2011 interview with GQ Magazine.

The advance single from Tighten Up, Vol. ’88 featured a really cute video of the band on tour and at repose, which made it seem like Mick Jones was having the time of his life being B.A.D. And yet (wrote the gray, unhappy and envious little man), it always seemed to me that Jones and his badmates were living on the equity earned by The Clash. You could argue that B.A.D. was blazing trails, only you could arrive at the same destination by listening to Malcolm McLaren’s “Buffalo Gals,” like, once. (That video had better hats, too.) “Just Play Music!” isn’t a bad song (“The Other 99” is better), and the nonalbum B side, “Much Worse,” is appreciably funny. Various singles included extended mixes of those tracks, which are just longer versions with more drumbeats, in case you didn’t figure that out already.