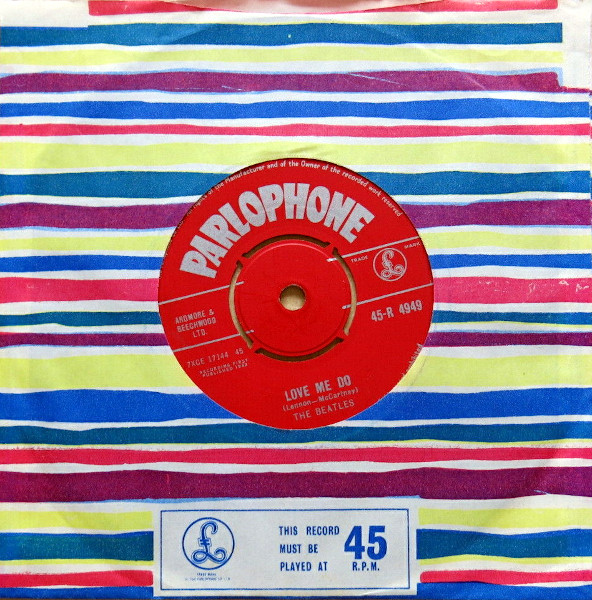 John, Paul, George and Ringo (and Andy) record their first single, and love them the world did.

Beatles fans are a miserable lot. Mention their first single and the conversation invariably turns to the decision to replace Ringo Starr (well, technically Pete Best) with studio drummer Andy White. I’ll spare you the details while speculating that Ringo’s conciliatory role in the band already has its origins here.

Love Me Do and P.S. I Love You have been pored over by historians who are far more knowledgeable than me, so I’ll keep this brief. Both songs feature the vocal harmonies popularized by The Everly Brothers, neither song stands with their best work. In fact, the rudimentary construction of “Love Me Do” seems light years removed from their next singles, “Please Please Me” and “From Me to You.” The B side, “P.S. I Love You,” is more sophisticated and showcases Paul McCartney’s balladry nicely.

The single was first released in the UK, where it climbed to a respectable 17. The single wasn’t released in the US until the Spring of 1964, by which time The Beatles broke internationally, with “Love Me Do” topping the charts and “P.S. I Love You” cracking the Top 10 soon after. It was a testament to the uniqueness of The Beatles that both sides of their singles charted well over their career, something that rarely happened outside of Elvis.

Of minor interest, Ringo did plays drums on a version of “Love Me Do,” and this was the version used for the singles. The track that appears on the album Please Please Me features White on drums and Ringo on tambourine. The presence of the tambourine is how you can tell the difference. Or, you could ignore the difference and get a life, I suppose.