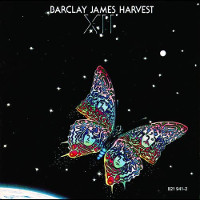 XII marks the 12th anniversary of Barclay James Harvest. Sadly, it also marks the end of an era, as Woolly (he of the ignominious misspellings) headed off for the progressive peaks of his own solo career after this album, making this the last record on which the original quartet played together. It would be nice to tell you that Woolly left on a high note, but XII is honestly a bit of a convoluted mess. John Lees seems to have written half of a concept album around writing genres, which are inexplicably interspersed between pop/rock songs from Les Holroyd and a pair of songs from the dear, departing Wolstenholme. Conceptually, Lees’ (more or less) half of the record doesn’t hold together. His “Streets of San Francisco” is memorable as a sort of modern-day “Rocky Raccoon,” but the rest of the tracks wouldn’t rank among his better work. In fact, it’s Holroyd this time who emerges as the better songwriter. “Berlin,” “Turning In Circles,” “Sip of Wine” and “Giving It Up” stand as some his catchiest and most commercial songs from any BJH album. Woollywatchers can point to a final epic fling on “In Search of England” (not one of my faves from WW, btw) and the surprisingly accessible “Harbour,” which is the most radio-friendly song Woolly has written since “Ursula.” Like Ghosts before it, XII feels like the band is out of its element. Maybe it was the presence of yet another producer (this time, engineer Martin Lawrence), road exhaustion or the simple fact that every BJH album was effectively a game of darts that required all three writers to be on their game. Whatever the reason, it remains an underwhelming record best remembered for Holroyd’s radio-friendly songs. I’m sure it has a place in a proper BJH collection somewhere; maybe in the back, propping up the other albums.

Original LP Version
A1. Fantasy: Loving Is Easy (Lees)
A2. Berlin (Holroyd)
A3. Classics: A Tale of Two Sixties (Lees)
A4. Turning In Circles (Holroyd)
A5. Fact: The Closed Shop (Lees)
A6. In Search of England (Wolstenholme)
B1. Sip of Wine (Holroyd)
B2. Harbour (Wolstenholme)
B3. Science Fiction: Nova Lepidoptera (Lees)
B4. Giving It Up (Holroyd)
B5. Fiction: The Streets of San Francisco (Lees)