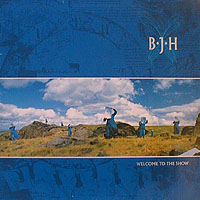 Kronomyth 19.0: IF MUSIC BE THE FOOD OF LOVE, PLAY ON. At this stage in their career, BJH was releasing a new record every few years featuring the songs of John Lees and Les Holroyd. Produced by Andy McPherson and Jon Astley with plenty of Fairlight programming, Welcome To The Show is another crisp digital recording of sweeping ballads (from Les) and edgier synth/rock songs (from John) covering the usual topics of love, war and personal stories. I confess to having had a pretty big blindspot where BJH was concerned, so I didn’t like this record when it came out, but these days I would tell you it’s the best thing they’ve done since possibly Ring of Changes. This time, John is the clear winner, whether it’s the sinister “Lady MacBeth” (with its shades of “Medicine Man”) or the sweet remembrance of the past on “John Lennon’s Guitar” (which recalls the circumstances behind “Galadriel”). Les’ songs seem bland by comparison, although “Welcome To The Show” is a nice addition to the band’s oeuvre and readymade for the road. While it’s not as classy an affair as the Pip Williams sessions, Welcome To The Show is a pristine and professional-sounding record that casts BJH in a flattering light. As others have mused, the band was largely a marriage of convenience at this point, with the music of John Lees and Les Holroyd finding a wider audience under the familiar BJH moniker. Mel Pritchard has had little to do since the band decided to go digital, so the drums on “African Nights” are a welcome reminder of his inventive playing (I’d throw his name into a conversation of underrated drummers right after Bill Ward). If you’ve enjoyed the band’s music in the 80s, there’s no reason not to show up for this one.

Original LP Version
A1. The Life You Lead (Holroyd)
A2. Lady MacBeth (Lees)
A3. Cheap The Bullet (Lees)
A4. Welcome To The Show (Holroyd)
A5. John Lennon’s Guitar (Lees)
B1. African Nights (Holroyd)
B2. Psychedelic Child (Lees)
B3. Where Do We Go (Holroyd)
B4. If Love Is King (Lees)
B5. Halfway To Freedom (Holroyd)

Original CD/CS track listing
1. The Life You Lead
2. Lady MacBeth
3. Cheap The Bullet
4. Welcome To The Show
5. John Lennon’s Guitar
6. Halfway To Freedom
7. African Nights
8. Psychedelic Child
9. Where Do We Go
10. Origin Earth
11. If Love Is King
12. Shadows On The Sky

The Pictures
Photography by Nexus/Peter Chatterton. Sleeve design by Nexus. Nexus also worked on the cover for Pink Floyd’s Momentary Lapse of Reason.