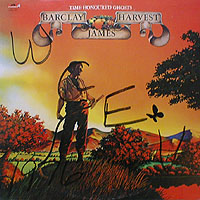 If my affections for BJH are marked by an arid inconstancy, it’s because of albums like this. I thought EIEE was a terrific record, but Time Honoured Ghosts goes right back to the shortcomings of Short Stories. Wooly (and where the ‘ell did the other L go anyway?) delivers a brilliant song in “Beyond The Grave,” which is a classical rock piece on a par with ELP’s “Pirates” (although far too short at four minutes). The rest of the record is uneven and, at times, far too derivative for a creative band like BJH. I mean, “Moongirl” pilfers “Stairway to Heaven” for crying out loud; I thought people got sued for stuff like that. And “Titles” is almost literally just a bunch of Beatles song titles strung together (although it’s a lovely melody that connects them). The rest of the record basically covers the same ground as previous albums: “In My Life” is a lot like “Crazy (Over You),” “Sweet Jesus” is similar to “Poor Boy Blues.” Even the better songs feel patterned on familiar artists: “Song For You” sounds like Les channeling John Entwistle, while “One Night” finds John channeling James Taylor (although it is a really good song). Most of the things that made EIEE a great album are missing here: the ambitious arrangements, rich harmonies, futuristic guitars. Oddly, Rodger Bain had the band sounding more like CSN&Y than Elliot Mazer. Go figure. The album cover is also something of a red herring, since this is their least proggy album to date. Having said all that, Ghosts became their highest-charting album. So much for the vox populi.

CD bonus track
10. Child of the Universe (remake for planned US single)