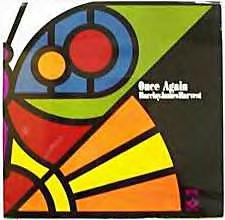 Barclay James Harvest would achieve fame as purveyors of pastoral, orchestrated progressive rock featuring fantasy and science fiction themes, a journey they begin in earnest on Once Again. It’s a very different record than their debut, which seemed to try a little of everything (rock, orchestral epics, folk songs) in search of an identity. Here, they find a workable formula: dark subject matter lightened with rich orchestral elements and clever musical interplay that suggests a cross between King Crimson and The Moody Blues. On this album, John Lees and Wooly Wolstenholme split the songwriting and singing; Les Holroyd (argubaly their strongest singer) doesn’t take a single lead vocal or write a single track (although it appears he did write half of the brilliant “She Said”). That fact alone may account for the consistency of the material; Woolly’s muse is clearly death, while John is more of a white knight. And so you have an album that balances between light and dark, love and death, while maintaining an elevated, almost ethereal quality. Once Again remains a fan favorite, and it’s easy to hear why; “Mocking Bird,” “Vanessa Simmons” and “Galadriel” maintain an evergreen beauty despite the passage of time. The opening “She Said” is also a minor masterpiece of progressive rock in my book, and probably as close as BJH has come to capturing the contained fury of King Crimson. Of note, the album reunites the sound team of Norman Smith and Peter Brown from Pink Floyd’s The Piper At The Gates of Dawn, and you’ll definitely want your headphones for Once Again too.

All songs written by Barclay James Harvest unless noted. (In fact, Lees wrote most of them.)
*Originally (and erroneously) credited to John Lees, “She Said” was actually written by Holroyd (the first part) and Wolstenholme (the second part).