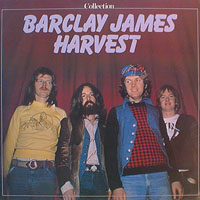 Today’s lesson is The Hasselhoff Effect, which states that any ratty atom can become magnetized in direct proportion to its proximity to Eastern Europe. Thus explained how Barclay James Harvest attracted a sizable following in Germany (along with Dave Dudley and the immortal Heino). Collection is a budget German release of early material that Harvest had license to… maybe a little too much license. For a band that didn’t have many hits, Best Ofs abound, from volumes one through three to The Collection (an altogether different collection than this collection, btw). So unless you find this for a few bucks in a used record store, don’t trouble yourself with adding this collection to yours. The song selection is pretty good, but there seems to have been some sort of conspiracy at EMI to block an actual greatest hits compilation from entering the market. Like Uriah Heep, the best bits of BJH are spread all over the place, so the band benefits from the compilation format, a point that EMI has taken to heart (assuming they keep their wallet in their shirt pocket). It’s made the BJH discography a jumbled mess of course, with the band’s back catalog constantly competing against each new release, but perhaps BJH is a band that shouldn’t work too hard to escape its past. The past (or a rediscovery of the past) is their future, and whatever legend time assigns to them will pivot on a post-60s naivete that served as the soundtrack to a Utopian catnap.