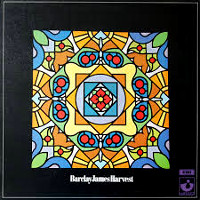 The band’s first full-length record was produced by Norman Smith, engineered by Phil McDonald and recorded in Abbey Road Studios—ideal circumstances for an English quartet, wouldn’t you say? Smith was currently the producer of Pink Floyd and Pretty Things; Harvest labelmates who were known for aggressive psychedelic rock. BJH, heretofore known for a pair of psychedelic but pastoral singles, adopted a more aggressive and ambitious stance on their untitled debut. The opening “Taking Some Time On” (recorded at the end of the Abbey Road sessions to give the record some punch) and “Good Love Child” showed a heavier side of Barclay James Harvest. More typical of the band’s mellotron-rich meditations and Moodies-inspired orchestral epics to come were “The Sun Will Never Shine” (maybe a half stone under “Seven Stones” in terms of progressive weight), “When The World Was Woken” and “Dark Now My Sky.” Rounding out the record are a pair of nontraditional and eerie love songs, “Mother Dear” and “Iron Maiden.” The band softened (some would say “refined”) their approach on subsequent albums, but song for song this is one of my favorite BJH albums. It’s an ambitious, auspicious debut, even if it’s not exactly on the vanguard of progressive rock. (Remember that King Crimson, The Nice, The Moody Blues and others had already planted the progressive flag on a higher peak.) A prototypical BJH album it isn’t, but their debut does score high in terms of excitement and energy, and is recommended to vintage psych/prog collectors.

Original LP Version
A1. Taking Some Time On
A2. Mother Dear
A3. The Sun Will Never Shine
A4. When The World Was Woken
B1. Good Love Child
B2. Iron Maiden
B3. Dark Now My Sky

All songs originally credited to Barclay James Harvest.
Later credited individually to Lees (A1, A2, B1, B3), Wolstenholme (A2, B2) and Holroyd (A4). 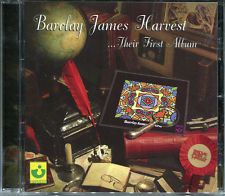